There have been no reports of injuries or damage in the French overseas territory, officials say.

Earlier, residents had been urged to go to shelters, following the 7.5 magnitude quake close to New Caledonia.

New Caledonia – with a population of about 270,000 – is part of the Pacific’s “Ring of Fire”, where many earthquakes occur.

The Pacific Tsunami Warning Center earlier said that some tsunami waves had been observed. 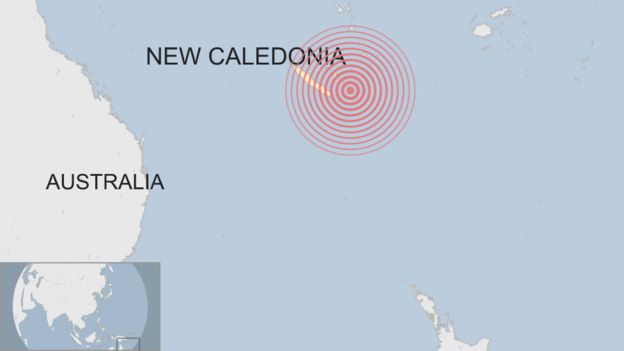 New Zealand’s ministry of civil defence and emergency management tweeted that there was no tsunami threat to the nation’s coasts.

The US Geological Survey (USGS) also recorded a series of aftershocks, two of them at 5.9 magnitude.

The Ring of Fire refers to a string of volcanoes, earthquake sites and tectonic plates around the Pacific. It spreads across 40,000km (25,000 miles) from the southern tip of South America all the way to New Zealand.

On Saturday, a 7.0 magnitude earthquake struck Alaska, causing people to run from buildings and briefly prompting a tsunami alert for coastal areas.

In October, a tsunami struck Palu in Indonesia following a 7.5 magnitude quake, killing more than 1,000 people.