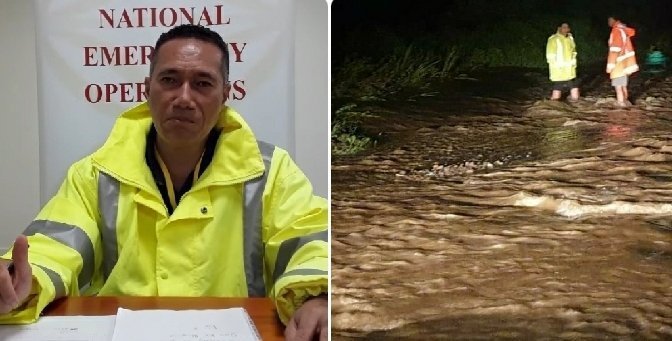 The rain has since subsided and as Samoa awakes this morning to calmer weather, warnings and updates from various partner Ministries of the NEOC were being posted late into the night.

Speaking to the nation from NEOC headquarters at Tuanaimato yesterday afternoon, the man in charge of Samoa’s national response in times of emergency and natural disasters, Agafili Shem Leo, addressed the nation with an update of flooding caused by heavy rain and assured the NEOC had been activated.

“As nightfall besets Samoa, we urge everyone to proceed with caution and heed to advice..”

Agafili confirmed Police, FESA, LTA and all other Ministry arms of NEOC had been activated to assess the flooding situation, and be on alert to respond.

“As nightfall besets Samoa, we urge all to proceed with caution, stay at home and avoid all low lying crossings now seen to be flooded and inaccessible”.

The Head of NEOC outlined tide times for Samoa, warning that the tide would be rising from 10pm, peaking at 1.30am.

The Head of the NEOC also outlined two evacuation sites that had been arranged last night.  The Seventh Day Adventist School at Lalovaea was set up with in partnership with ADRA; with a second evacuation site also arranged by the NEOC at the National University of Samoa.

“All families in low lying areas of Apia, it is best to respond now and head to safety while there is still daylight and before nightfall..” advised Agafili.

“As advised by the Director of Health, with heavy rainfall causing water cuts to some areas, please boil drinking water..”

Finally Agafili requested the cooperation of parents to keep young children and youth at home, and warned against those who go towards flooded areas with the aim of taking photos.

“Please parents keep a close eye on young children and youth.. this is not a time to be out and about trying to take photos..”

Agafili called for the nation to remain calm and steadfast in its faith in God.

“Samoa remains steadfast in faith in God upon whom we are founded as a nation, and pray for his loving and continued guidance upon us,” concluded Agafili.