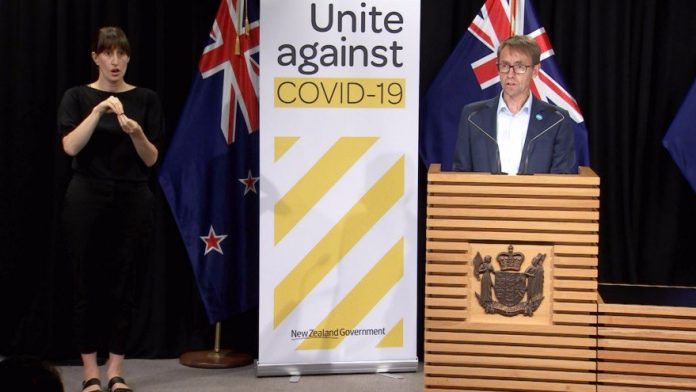 It brings the total number of Covid-19 cases to 205. So far, community transmission has been confirmed in four cases.

Director-General of Health Dr Ashley Bloomfield announced the new cases today as he fronted the media. He said 47 of the 50 are confirmed while three are probable cases.

Also fronting media was Sarah Stuart-Black, director of Civil Defence Emergency Management, who announced the state of emergency had been declared at 12.21pm by Civil Defence Minister Peeni Henare.

Since 2002, the only nationwide state of emergency declared in New Zealand was for the 2011 Christchurch earthquake.

“The state of national emergency has been declared because of the unprecedented nature of this global pandemic and to ensure the Government has all the powers it needs to slow the spread of Covid-19 and reduce its impact,” said Ms Stuart-Black.

A nationwide mobile alert to all of New Zealand has also been introduced. Ms Stuart-Black said it will be issued between 6-7pm tonight to reinforce to New Zealanders how critical the lockdown is.

Ms Stuart-Black said the state of national emergency provides access to powers that might normally not be available.

Those powers include the closing of roads, stopping people from doing activities that may contribute to the emergency, excluding people from places and prohibiting or regulating traffic.

“This declaration of a state of national emergency ensures we have that we have all of the legislative means possible, all of the enforcement powers, all of the tools that we need at our disposal to combat the spread of Covid-19,” said Ms Stuart-Black.

She said people should be going out for a reason such as going to the supermarket, “not just a bit of a mooch”.

Consequences for Kiwis not abiding by the nationwide isolation are expected to be announced by police later today or tomorrow morning.

Dr Bloomfield said there are now 22 people that have recovered from Covid-19. Three patients with the virus were discharged from hospital yesterday.

There are currently six people in hospital with Covid-19, all in a stable condition. Three are in Wellington regional hospital, one is in Rotorua and two in Waikato. None are in the intensive care unit.

Across the country there were 1421 tests processed yesterday.

The total number of tests processed to date is 9780.

Dr Bloomfield said the new cases reported today are actively being followed up by health authorities.

He said the majority of cases still have a direct link to overseas travel, including being in the same household as someone who has returned from overseas.

There are five confirmed cases within one school in Auckland – Marist College. The school is closed and has been closed all week and all students and staff are being managed as close contacts.

Dr Bloomfield said that means they are expected to be in monitored self-quarantine for the next 14 days, or 14 days since last contact with each other.

There are a number of staff members who are being tested or are about to be tested, as they have symptoms.

He said New Zealand will see a rise in cases for the next 10 days, from people infected before today.

It comes as the country prepares to go into a four-week lockdown, effective tonight at 11.59pm. The state of emergency applies to all of New Zealand including the Chatham Islands, Stuart Island and other offshore islands.

Level four is put in place with a risk of sustained level of virus transmission. Contact between people is largely eliminated, with the public urged to stay at home.

Essential services, including supermarkets, health care, service stations and media, are all remaining in place during this time.