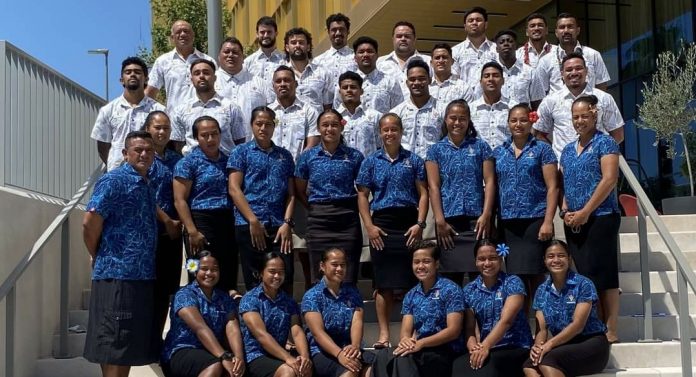 The press statement confirms that the entire travelling party prior to leaving for Europe, had all completed their two Astrazeneca vaccinations here in Samoa.

Despite this, the Team and Management were offloaded when the tests conducted, “did not meet the specific medical test requirements under Samoa’s Covid-19 pandemic SOE border requirements”, reads the statement.

The Team has been accommodated in Dubai since the 23rd June and have recently completed all their required
blood serology and Covid-19 tests.

The additional testing requirements has meant the national teams miss their scheduled return on the passenger flight transiting from Auckland to Apia on the 25th June.

The teams are now aiming for the next flight on 26th July according to Faleomavaega.

“Alternative proposed options for consideration to NEOC and subsequent recommendation for
approval was declined by Cabinet pending tests results and also in consideration of the Government’s major concerns in
the pandemic variant happenings in Fiji and recently in the Manu Samoa match in Wellington last week was also a
deciding factor to continue our border protection.” reads the press release.

“The team’s since has completed all the tests and results conducted in Dubai which have all come back negative”.

“The welfare of our players is our priority and we are liaising closely with the Management at all times together with
support from World Rugby, HSBC Dubai Rugby Officials, Pacific Rugby Players and a few Dubai based Samoan
Community to ensure all our travelling team and Management (30 paxs) are cared for in a safe and comfortable environment at their Hotel Accommodation in Dubai.”

Faleomavaega also added; “Lakapi Samoa wishes to note that we respect and comply with the position taken by the
Government to continue protecting Samoa from this deadly virus and we are exploring all possible options with our key Stakeholders to bring our Team home safely.”