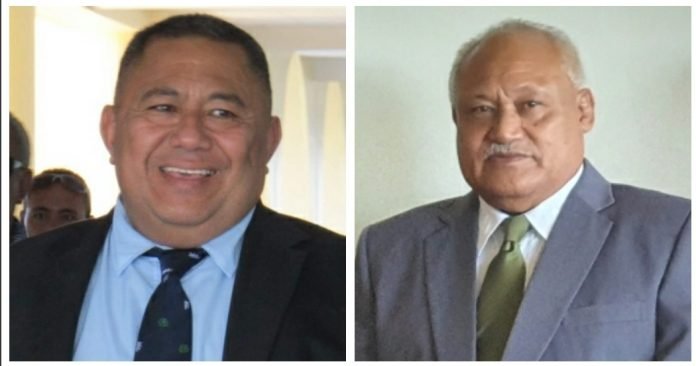 An agreement could not be reached yesterday afternoon and the two parties were given a final opportunity to negotiate.

Outside court, businessman and former President of the Samoa Chamber of Commerce, Namulauulu Papalii Sami Leota confirmed he has agreed to withdraw his petition and wished Papalii Lio well in serving their constituency.

A lawyer by profession and former Assistant Commissioner of Police, Papalii Lio Masipau thanked Namulauulu for allowing him to continue as the elected MP for their constituency.

Papalii Lio, who had won the Fa’asalele’aga No.3 seat at the April 9th general elections by 1341-1124, thanked Papalii for withdrawing his petition against him.

“Thank you Namulauulu for your understanding (finagalo malamalama) and for giving me this opportunity to serve our constituency for the next five years,” Papalii said outside court.

“I will do my very best to serve my constituency with all that I have, and strive for a better future for the people of Fa’asalele’aga No.3,” he added.

Regarding the out-of-court negotiations with Namulauulu, Papalii says there is no intention for him to resign, or put the Constituency through another by-election.

“We are from the same constituency and the agreement made is for the betterment of the people of our itumalo,” Namulauulu added.

Papalii Li’o is now onto his second term as Member of Parliament for Fa’asalele’aga No.3. He was first elected into Parliament in 2011 where he ran the general election under the umbrella of the Tautua Samoa Party.

In 2019 he and Namulauulu Sami both ran under the HRPP umbrella in a by-election following the death of Pa’u Sefo Pa’u who had won in 2016. Namauulu Sami secured that by-election by a landslide win.