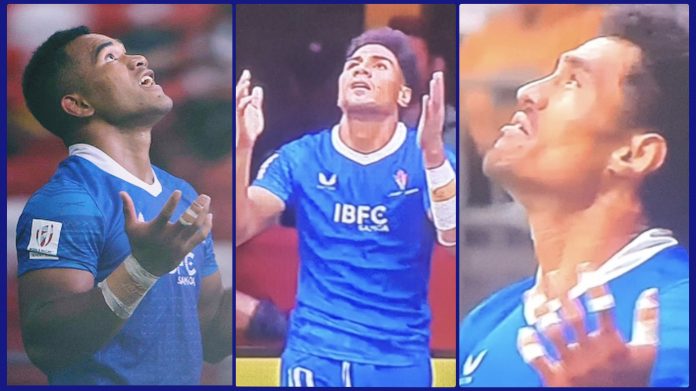 10am 18 April 2022, Vancouver Canada HSBC 7’s  The Manu Samoa 7’s opened their first match of the Vancouver HSBC tournament with a solid 26-12 win over Wales. This was followed by a 35-10 win over Japan for their second pool match of the day. They are due to face New Zealand at 12:28pm later today.

Three players crossed over the line to secure Samoa’s four tries in their opening match, and each time, as soon as the ball was grounded, the try-scorer was seen lifting their hands in praise, and looking up to the heavens.

As if all too aware that Samoa’s tapuaiga back home was on Easter Sunday, Steve Rimoni Onosai, Paul Scanlan, and Vaafauese Apelu Maliko (who crossed over twice) – all celebrated their tries with the same gesture of sending a silent prayer of thanksgiving and praise, to God.

Before millions of HSBC 7’s series viewers across the globe – the Manu Samoa 7’s players have taken their testimony of God’s love for us, to the world. We’ve also seen our Fijian brothers do this over the years of their success with 7’s, always praying publicly, always gesturing that they are giving praise back to God when they cross the tryline.

The mostly young side looked more focused in their return for their second only taste of the world sevens series, almost as if this past week of reflection and learning since the Singapore 7’s had matured them.

The first try of the match went to Samoa. Off some awesome team work,  Steven Rimoni Onosai showed a little individual brilliance with a run down the side of the field, inches from the sideline. He evaded Welsh defenders and fended off the last man to cross the line for Samoa. Melani Matavao puts the kick over for a successful conversion.

With 2 minutes left in the first half, Co-Captain Melani Matavao earned a yellow card for a deliberate knock-down from an off-side position in defense. Two minutes with 6 players against 7 is never a good thing for rugby sevens.

But again, we saw the maturity of Muliagatele’s young side featuring 9 debutants. They stayed cool, calm and collected under the pressure of being a man down.

The Manu Samoa 7’s players maintained their defensive line and instead of letting Wales capitalise on their advantage, with God on their side, Manu Samoa instead crossed over for a try – while they were down 6 players to Wales’ 7!

Vaafauese Apelu Maliko took control of the situation just infront of their own 22, and runs 60 metres to secure Samoa’s second try, converted by Paul Scanlan. With a serious focused look, Scanlan lifts both hands, and looks up to the heavens. “Thank you Lord”.

In the second half, Wales responds with a try to their 21-year-old wing Ewan Rosser, converted by captain, Luke Treharne.

The boys in blue responded with a try to Paul Scanlan. Gaining his confidence back after last week’s two yellow cards against NZ, Paul Scanlan pulls off a run from behind a tackled ball that had just been placed by Vaafauese with Indiah in support.

Scanlan slices down the middle of the Welsh defense and beats a desperate chase by Jay Jones of Wales. The conversion is unsuccessful and Samoa leads 19-5.

Wales managed to score their second try in the dying seconds of the match for a 26-12 win to the Manu Samoa 7s.

Faamalosi Manu. And continue to Return the Praises to God. He’s got you and Y’all got this.