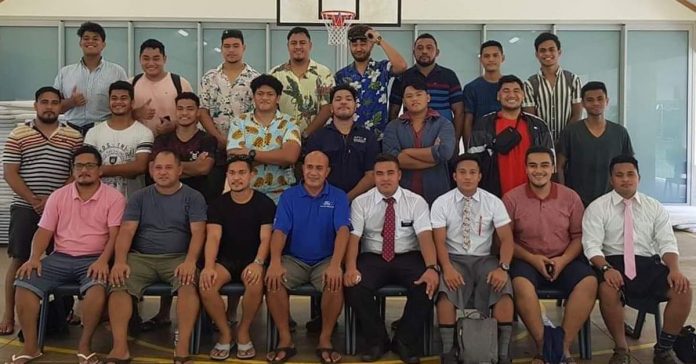 Beds one metre apart in a basketball gym, shared bathroom facilities, portable loos, and living in isolation for 14 days with people they hardly even knew did not dampen the spirits of the 25 men and 24 women who had been quarantined at the Mulifanua LDS church compound.

Finally released on Wednesday after satisfying the mandatory 14 days, they were thrilled to be reunited with their families last Wednesday in time for Easter; but two young men share how the experience has made them lifetime friendships and memories they will nurture for years to come.

The group consisted of Samoan citizens who had opted to come home from Fiji amidst the uncertainty of the deadly coronavirus pandemic, most of whom were students on scholarship and/or privately funded.

When they arrived at Faleolo International Airport on the last flight from Nadi before borders closed, the Government had decided that due to Fiji registering its first few cases of COVID-19, all passengers would be placed under compulsory isolation to ensure Samoa’s protection from coronavirus.

Third year Law and Social Work student Romeo Toailoa Sabbath says the realisation on that first day, that he would be spending two weeks in isolation with people he hardly knew, was tough.

“Prior to our arrival in Samoa we were told that we would have to be quarantined but that was about it;

“We didn’t know where we were going, or what it was going to be like but we were hopeful and anticipating for the best”.

Son of Apostle Misa and Pastor Ruby Sabbath Ponafala of His Word Ministries at Nuu-Fou, Romeo says it was tough to not be able to see parents and families waiting for them that day, at Faleolo.

“So we arrived at Faleolo Airport and we proceeded through to the medical clearance team, then to the baggage claiming area, and then through customs; but unlike the usual airport process, we could not go out. We were taken to a corner instead;

“There, we were divided into three categories: Males, Females, and Families who were travelling together;

“At that point I was feeling a little emotional because I wasn’t able to go out and see my family but instead we were loaded onto buses (based on the three categories) and taken straight to our quarantine location”.

Romeo said couples and families with children were then transferred to Moanalisa Hotel, while the male and female buses got transferred to the Mormon Stake Center in Mulifanua.

“Well our bus initially went to Aana primary school, but soon after we arrived there, we got loaded back on, and taken to where the girls were, at Mulifanua”.

“We arrived in Mulifanua, unloaded and settled in. The girls’ beds were in the rooms while us boys had to sleep altogether (but a metre apart from each other) in an indoor basketball court”.

“There were portable toilets and outdoor showers that seemed to be newly set up”, said Romeo.

The hardest day for the group was that first day in quarantine, and the realisation that the next two weeks would be spent under these unfamilar and uncomfortable circumstances with people whom at that time, were total strangers.

“I was dreading the thought of staying there for the next 14 days. It hadn’t even been a full day, but I was ready to go;

“Especially since I only knew a few of the people I was there with, and I wasn’t accustomed to those living conditions”.

“I was in a situation I had never been in before”, said Romeo.

“But the happy news is, those feelings I had only lasted for that first day.”

The group of students included a doctor, a dentist therapist, a policeman and a pastor on postgraduate studies in Suva. Together the group turned the situation around in true Samoan resilience and by the end of the mandatory qurantine period, they were likened to a close extended family.

The former Samoa Star Search winner says, “Our quarantine became less of an isolation and more of a camp – we sang songs, played games, told stories, and we worshiped and prayed together;

“I met some great people and made new friends; we plan on having a reunion some time in the near future, that’s how close we’ve become”, said Romeo.

A 3rd Year Commerce student majoring in Economics, Akira Lima, says it was a character-building experience which at first, was a little uncomfortable, “but once we started to bond, it was fun”.

Akira praised the medical team who had been assigned to them as well as the catering service that provided their meals.

“The nurses and doctors checked our fever every eight hours throughout the day, they took good care of us, we were treated well;

“We got 3 meals a day catered by Fong and tbh that was the highlight of the quaratine🤣”.

Akira Lima laughs and says they were also given Care Packages upon arrival, showing us a photo he had taken of his pack.

The group saw the 14-day quarantine measure as a necessary step and commended the government’s stance to ensure Samoa’s safety.

Romeo Sabbath adds, “I’m extremely grateful for what our government is doing. Fiji has 15 cases as of today, whereas Samoa has none, yet our government are taking more precautionary measures then they are;

“I think this is extremely necessary for Samoa because for sure we don’t have the capacity to take on this global pandemic. So all in all, quarantine was a great move by the government”.