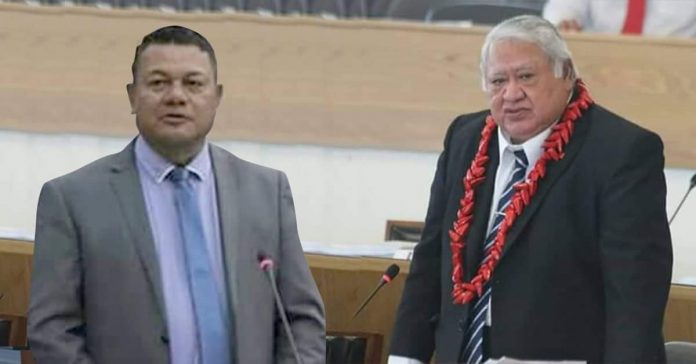 During his Parliamentary address, Faumuina urged the Minister of Natural Resources and Environment (MNRE) Hon Fiame Naomi Mataafa to return leased customary lands to their traditional owners after the terms of leases lapse.

Prime Minister Tuilaepa Dr Sailele Malielegaoi intervened, stating that there are only two ways that Government takes over customary lands. The first is by lease for public development projects and the second is through the Taking of Land Act for projects of public benefit such as roads.

The Prime Minister told the MP for Urban West that Parliament was not the place to raise this issue.

“You could have addressed this directly with the Minister,”

He added that Faumuina would have had a better understanding if he was present at meetings where these issues are discussed.

Faumuina Leatinuu tried to continue and reminded the Speaker of the House that Parliament is where MP’s must raise their concerns and air their thoughts.

This did not sit well with the Prime Minister and he once again interjected to further explain the issue, saying that his Cabinet were not stupid so when issues need to be clarified and corrected, it was their role to do so.

Faumuina then stood up again to speak about being a member of the ruling HRPP party. He explained that all of them who are members of the Party are different. He said some members will agree with everything the Government is doing
and some members like himself will have a different way of approaching an issue.

This seemed to anger the Prime Minister, so Faumuina retreated, stating that he would refrain from discussing the other issues that he had wanted to raise.

Speaking to Samoa Global News after Parliament, Faumuina agreed with the Prime Minister’s application of the Taking of Lands Act to roading developments.

However he said that he was referring to long term leases for townships and airports, such as the Salelologa township and the Tiavea airport.

“I understand the application of the Taking of Lands Act to roads. But I was referring to Salelologa and Tiavea;

“When the town and the airport are complete, then the lands should be returned to the villages.”

In response to the missed meetings aired in Parliament, Faumuina said the timing of recent meetings just happened to coincide with a family wedding, an official overseas trip and his own 60th birthday party.

Faumuina said that the Vaiusu wharf which is located within his constituency was the other issue he had wanted to raise, but decided against it.