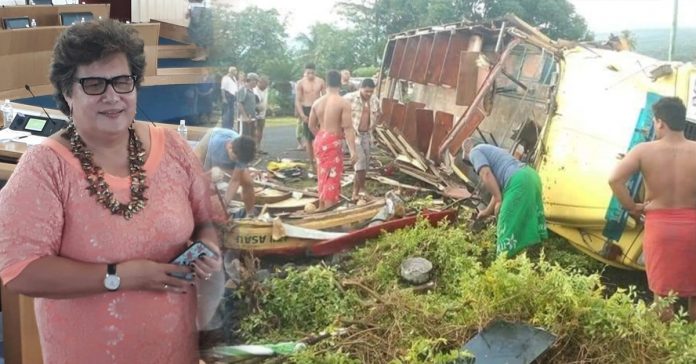 18 June 2019, Apia Samoa. Member of Parliament for Gagaifomauga No.3 Hon Faaulusau Rosa Duffy Stowers has called on the Government to set aside a budget for a commercial driving school in efforts to keep people safe on buses and other public transport.

In the past 12 months, there have been several bus crashes with the most recent being a bus in Auala carrying more than 60 students.

She said that in most cases, the commercial drivers are blaming faulty breaks as the main cause of accidents.

According to Faaulusau, a driving school could teach defensive driving as well as basic common sense  which seems to be lacking amongst some of the reckless drivers involved.

She added if drivers applied common sense to their actions and decisions, accidents involving buses and taxis could be prevented.

In responding to the issue raised by Faaulusau, Prime Minister Tuilaepa Sailele Malielegaoi said the only way to solve such a problem is to impose heavy penalties upon both the bus driver and the bus owner..

The Prime Minister added that another key element of the solution is for the Samoa Police Service to monitor and enforce the penalties.