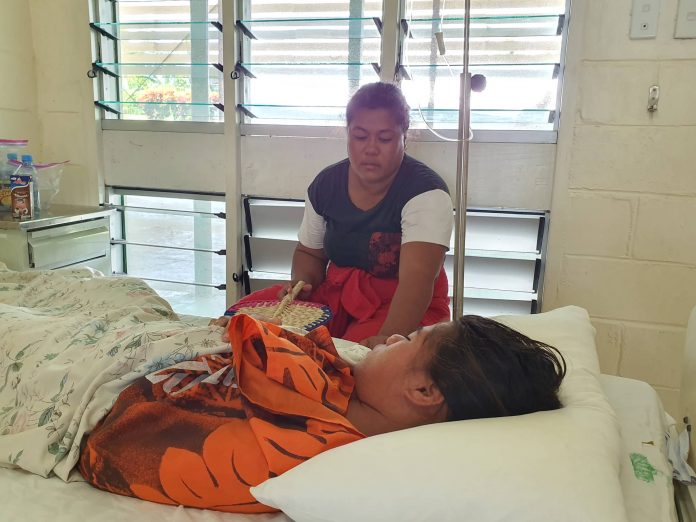 The 43-year-old mother of five is unable to mourn her son as she is now sitting by the bedside of her 13-year-old daughter, Fofoa, at the Poutasi District Hospital.

Fofoa was diagnosed with measles today and Sui is worried about her daughter who lies uninterested to talk or smile, heartbroken about loosing her younger brother.

“Fofoa is sad about her brother, they were very close. But you can see the rash now on her face, that only showed up today after the burial”.

“Before that she was just complaining of a headache,” said Sui.

Sui and her husband Tamalemai first took their son Foalima to the District Hospital on Friday 22nd November where they were told that Foalima did not have the measles. He was given a prescription and sent home.

“I brought him in on Friday with a high fever and a strange rash on his leg. They gave us tablets, and we were sent home”.

The fever did not subside so Sui took her son into the hospital again on Saturday.

“We brought him back on Saturday because his fever wasn’t getting better but they told us to keep taking the medicine.”

Three days later on Tuesday 26th November, Sui and her husband took their son into the Motootua National Hospital where he was finally admitted and treated, until he died on Friday 29th November 2019.

“On Tuesday my husband and I decided to take him into Apia and on the way in we saw that he was getting worse, with shortness of breath,” said Sui.

“They treated him from Tuesday to Friday, when we died”.

Sui says they were never told if Foalima had contracted the measles.

“We were not told that it was the measles, they were just treating him.”

Sui and Tamalemai are now worried about their other children with their daughter Fofoa now in hospital, and they have an 8-year-old at home also.

The Prime Minister of Samoa as well as the Chief Executive Officer of the Ministry of Health have repeatedly blamed parents in media statements over the past few weeks, for not bringing children to the hospital on time, for the interference of traditional healers and for their “negligence” in failing to have their children immunised.

The door to door mass vaccination campaign today aimed to rectify Samoa’s low vaccination coverage believed to have been as low as 20% before the oitbreak.