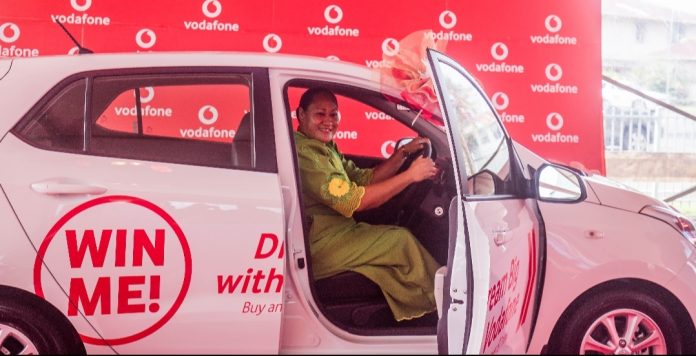 A faletua studying at Piula Theological College with her husband has won the first of three cars to be given away as part of Vodafone’s Win Big Dream Big promotion.

Epi Lini had caught the bus from Piula to get to the Prize Giving and then had to go through a final competition round before she was given the keys to her brand new Hyundai Grand i10s.

Five finalists were asked to attend the prize giving. They then had to pick a number from 1 to 5 to determine who would be given the first pick of the right set of keys, from over 10 sets of keys that had been put into a box. They were then made to walk over and try their luck to open the car.

The crowd cheered as the Faletua from Apia opened the car door with her chosen key.

The teary Mrs Lini thanked the organisers and said the car would be a big help and blessing to their work as students and in serving the Church.

The Vodafone Headquarters at Maluafou was buzzing with excitement as the first car prize and the 4th week of cash prize giveaways were announced.

The other 4 contestants did not go home empty handed, they were rewarded with brand new Samsung A10 Handsets and Vodafone Merchandise valued at approximately $1000 tala.

Vodafone had the Samoa Prime Minister also in attendance.

Honorable Tuilaepa Aiono Sailele Malielegaoi opened the prize giving ceremony with short remarks saying, “..the arrival of Vodafone into Samoa has brought in an abundance of blessings for our country such as the investments of over $8 million tala into making, operating & upgrading the fastest & largest 4G+ Network in Samoa with over 90 towers – connecting to the Tui Samoa towards Australia and on Hawaiiki towards US making Vodafone Samoa’s Services of equal standard into any developed country.”

The Prime Minister went on to say that the competition between telecom providers has been taken to another level with the rebranding of Vodafone.

“I must conclude by saying that I note the recent intensified competition through the arrival of Vodafone in Samoa, and that through this arrival; our people are now enjoying the benefits of lower rates and better services.”

The Vodafone Win Big Dream Big promotion will see customers go into the draw to win two more brand new Hyundai Grand i10’s drawn at the end of the next two months. There are also cash prizes worth over $55,000 tala, distributed to 5 x $500 tala winners, 5 x $200 tala winners and 8 x $100 tala winners every week.

To go into the draw to win, customers have to buy any bundle worth $7 tala or more. They would then earn an entry for each tala spent. For example the $11 tala Malo bundle would earn you 11 entries while the $10 tala Fiafia bundle earns 10 entries.

Vodafone’s CEO Nofoasaefa Satish Sharma said the promotion has been quite a hit and well celebrated within the country. “While this promotion is being celebrated as a blessing, I would like to take this opportunity to share that this is not the end. This is just the first stop of the journey. This scheme is for three months and today we complete the first draw and one of the three cars will be given away today to the luckiest winner. Two other cars will continue to be on the block and available for the next two months, you only just have to buy any bundle over $7 tala to go in the draw to win big!”