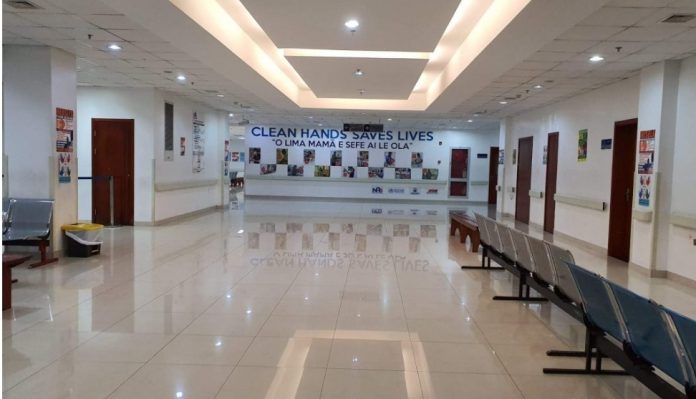 The mother of the young woman in isolation as Samoa awaits test results for a suspected COVID-19 case has spoken out about the impacts of the name and shame that has come upon her daughter, whose fever and sore throat, she says have completely subsided with antibiotics treatment.

A press release from the Samoa Ministry of Health issued Wednesday night said Samoa had a patient isolated at the Tupua Tamasese Meaole Hospital awaiting COVID-19 test results, reiterating that “this is a suspected case only”.

However within 24 hours the local daily newspaper issued a  article headlined, “Woman suspected of coronavirus identified”.

The article was then shared onto social media with the caption: “The identity of a young woman who has become Samoa’s first suspected case of coronavirus has been revealed as……”

The article goes on to say that the young woman was in Samoa to celebrate her 21st birthday and also names the local business where the celebrations were held.

In addition to that, during the Samoa Prime Minister’s weekly session with the Government owned 2AP radio station and Facebook live programme, Hon Tuilaepa Sailele revealed the village of the young woman.

He said everyone on the Samoa Airways flight Auckland-Apia last Wednesday 11th March was at risk but did not mention the flight number or seat numbers. He went on to say that everyone who would have been at the young woman’s 21st birthday would be affected (ua aafia).

He said if she had gone to church, then everyone in her congregation was affected. He added that if there were children in this family and if those children went to school, they would have endangered other people’s children.

“That means that in the end, there would be not less than 200 people affected; and that is the magnitude of this situation..”

The Prime Minister then went on to say that this is why Government had been issuing public warnings. He spoke about the Government response as if the young woman had already been infected by Covid-19, detailing the virus spreading on her clothes and through her touching utensils such as spoons.

“That is why the Government is now going to take measures, which will be revealed tomorrow, that includes school closures, restrictions for travel, closure of scholarship awards, and a stop to all buses..”

Last night the young woman spoke out to say that she, as well as her family and her village have been named and shamed and the social media frenzy around her was overwhelming, starting within minutes of these media reports.

She posted that her family has been cyber bullied by the many social media reports and her village name has been dragged through the mud (faatasiga).

Speaking to Samoa Global News from the hospital the young woman’s mother says she and her daughter have both been under a cloud of deep sadness and depression since her daughter’s name was revealed, adding that the Prime Minister’s comments were also very insensitive.

She says her daughter did have a fever and a sore throat so they took her to the hospital.

“The fever got better; she also took augmentin and her sore throat is gone too.”

She says the doctors have told her to stay in hospital until the test results come back on Friday, but her daughter feels fully recovered and they are both ready to go home.

The mother said she has received a phone call from a village matai, that she is needed to attend a special meeting of the Village Council on Friday morning.

“The village council are very upset with what the Prime Minister said”.