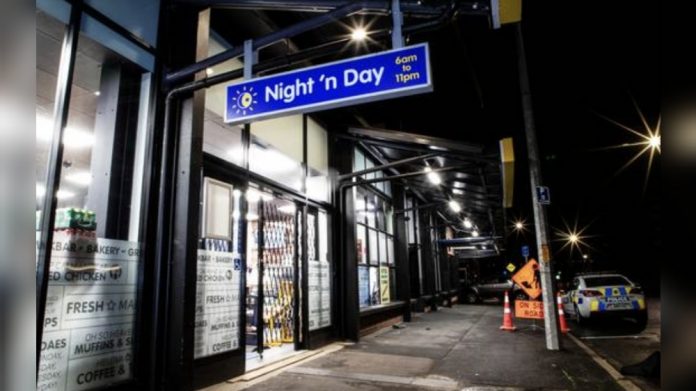 Police were called to a burglary reported at the Night ‘n Day store in Onehunga shortly after 1am.

The NZ Herald reports the entrance and front windows of the store were severely damaged by those responsible.

It is understood this is not the first time the store has been targeted by thieves.

Just before midnight police also responded to an attempted burglary at the Meadowlands Shopping Plaza in Howick.

At about 12.15am – police officers were called to a commercial property on Great South Rd in Penrose.

Authorities were also sent out to the Miss Q’s bar at the Westgate Shopping Centre in Massey, West Auckland, shortly after 3am after reports of a burglary.

All of this while police in the South side of the city – near the Auckland Airport – responded to a reported burglary at the Subway restaurant on Leonard Isitt Drive.

The latest incidents come after Police Minister Chris Hipkins revealed yesterday that there have been 129 ram raids since May this year – and nearly all of them had been carried out by youth under 18 years old.

After being asked questions from the Act Party in the House on Thursday he said 38 offenders had been either identified or arrested from the raids.

Almost all of these people are under 18 years old and their median age was 15,” he said..

A further 27 offenders have been  captured on CCTV security footage, Hipkins said, and that Police know who these people are.

Of the 129 recorded ram raids, the majority of 84 were in Auckland; where ram raid incidents and smash-and-grab type burglaries have traumatised business owners and workers.

There has been a 400 per cent increase in ram raids in the last five years and 76 per cent of those being caught are under the age of 18, RNZ reported last month.

Speaking to Newstalk ZB’s Mike Hosking this morning, Police Minister Chris Hipkins said it was “concerning” to see the spike in youth offending.

“The numbers are difficult to stomach.”

But there had been more than 250 arrests and 1000 charges laid in relation to ram raids in recent months, Hipkins said.

When asked about why the offenders were not locked up, Hipkins said, “jail itself does not deter offending”.

“In jail, they are joining gangs, there is a higher chance of serious offending with a custodial sentence.

“Putting them in jail does not solve the problem.”

Hipkins said it was important to address the underlying issues on why these young people were not engaged with the systems.

“School truancy is one of the factors … these young offenders have a complex background; they may not have a supporting or nurturing environment.”

Hipkins said police were working closely with stores to address their security concerns and needs however, “hardening the target won’t solve the problem, we got to get to the root cause of the offending”.

“We are aware of the issue of bollard application delay which is slowing down the installation process, we will look into that and talk to Auckland Council on how to speed it up.