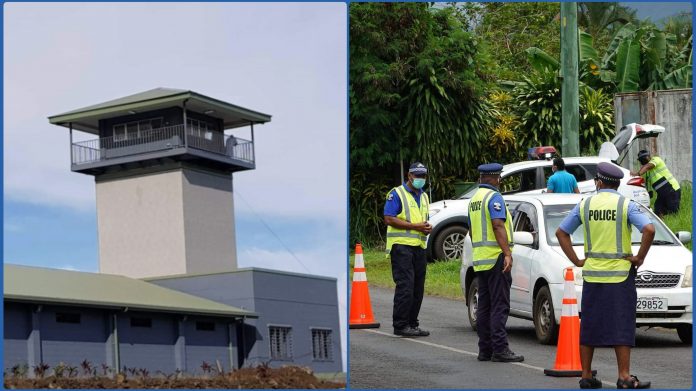 Friday 25 March 2022, Apia Samoa. More frontline police officers have tested positive for Covid-19, with the number now at 28, up from only four reported earlier in the week.  Deputy Police Commissioner Auapaau Logoitino Filipo confirms the number has increased since Monday’s update. “The officers affected have included those in close contact with members of the public, either on duty at Faleolo International Airport, or managing police road blocks,” said Auapaau.

Auapaau said Tanumalala is essentially a bubble, with no visitors allowed in, and no-one allowed out, including the prison guards and staff, who are now camped there.

There are over 300 inmates including those in custody at  the Tanumalala Prison and Corrections Centre, said Auapaau.

“As of today, they are all safe with no known cases of covid-19. We have stopped all visitors, and our Corrections Officers have made the ultimate sacrifice of camping there until the lockdown is over and we can be sure all inmates and those in custody, are safe.”

Auapaau said there are close to 900 police officers patrolling Samoa under Alert Level 3 lockdown status, and all of them are camped at various police outposts across Samoa.

The Deputy Police Commissioner called on the public’s cooperation during the lockdown. “The NEOC are issuing regular updates of SOE orders, and we ask the public to please be aware of what is being handed down, to avoid confusion and misunderstandings when Officers do their job to enforce those orders”.