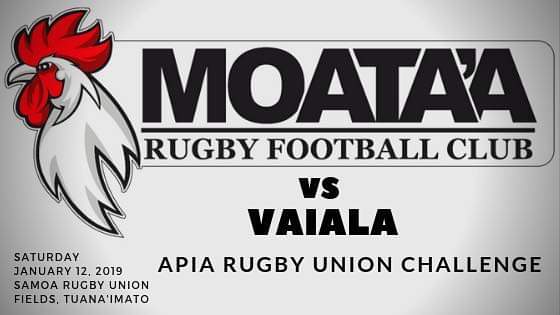 10 Jan 2019, Apia Samoa. The Apia Rugby Union Will kick start it’s 2019 season this Saturday 12th January with a clash between 2018 champions Moataa and their brotherly rivals and shield holders, Vaiala.

The match will be played at the Samoa Rugby Union grounds at Tuanaimato due to the closure of Apia Park for renovations.

He told Samoa Global News that Moataa is all set to challenge the shield held by Vaiala this Saturday and that they have trained hard all week.

“We know that we are the first challengers of the shield  We didn’t get a chance to play for the shield before the season ended last year”.

Manager for the Vaiala Blackies Tafaomalo Laifa Faletolu says that their team is still on holiday mode since most players from last year have just got back and they are now facing a big challenge ahead.

The Moataa Rugby Club Facebook page calls on all supporters to attend the game on Saturday.

“We’re up against our neighbors and brothers from Vaiala. Let’s all turn up at the Samoa Rugby Union Grounds this coming Saturday to support our boys. Both teams will play challenge matches as per Apia Union Week 1 schedule.
U20’s Cup: Moata’a vs Vaiala, 11:30am.
Premiers Shield: Moata’a vs Vaiala, 4:00pm.