The new Moataa Primary School building stands proud in its new location further inland, now closer to the village rugby field and village tennis courts. It can be seen from the inland road that takes you to Taumeasina Island Resort. 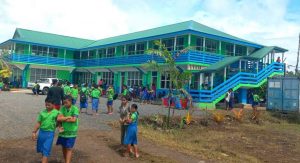 With 16 classrooms, a principal’s office and staff quarters, the building project which included a sports field was a coordinated effort with support from the Governments of Samoa and Japan, as well as donations from families and village diaspora through a radiothon fundraiser.

He said the Ministry of Education Sports and Culture (MESC) were instrumental in making the sports field possible, and they had received over $300,000 tala from Japan through it’s Grant Assistance for Grass-roots Human Security Projects (GGP).

“The rest was through the generosity of village members, family and community organisations both local and overseas through direct donations as well as a radiothon that our committee had run,” said Tofaeono.

Tofaeono said the work of the School Committee is ongoing, with both short and long term projects in the pipeline to continue their goal of improving access to quality education for students, not only from Moataa, but from neighboring villages and beyond.

He said a school fence was being built next week, the school sports ground works are ongoing and plans were underway to start raising funds for a school science laboratory and a school library.

School Principal Mr Tito expressed his gratitude for the new location and improved building site. He said the previous location was close to the road and this was proving to be unsafe with the growing number of student enrollments, which is currently at 564.

“This is a dream come true and a huge improvement for us,” said Mr Tito. “During the rainy season, there was flooding all around us, and being close to the main road was also a major disruption for students during exam time,” he added.

The Moataa School Committee has the support of Leanata’i Victor Tamupua who is serving his second term as MP for the densely populated urban set of Vaimauga 2. Lenatai spoke about the relocation being necessitated by the impacts of climate change on the Moataa wetlands – a topic he has raised through parliamentary addresses in the past.

Moataa village is the location of one of Samoa’s most notable mangrove ecosystems and wetland areas. Over the years the community have experienced the swells of tide moving inland as an impact of climate change. A Moataa Mangrove Restoration Project was launched in May 2021, supported by the U.S Embassy, European Union, Samoa Tourism Authority and other partners.

MP Lenatai said the location of Moataa’s new school building site took into account expert engineering advice on rising water levels and ongoing swamping of the mangrove area. He said with drainage being a challenge for the area, inherent health risks due to sanitation and other factors had to all be considered.

The official opening of the Moataa Primary School site will be held next Tuesday 1st March, at 9am.