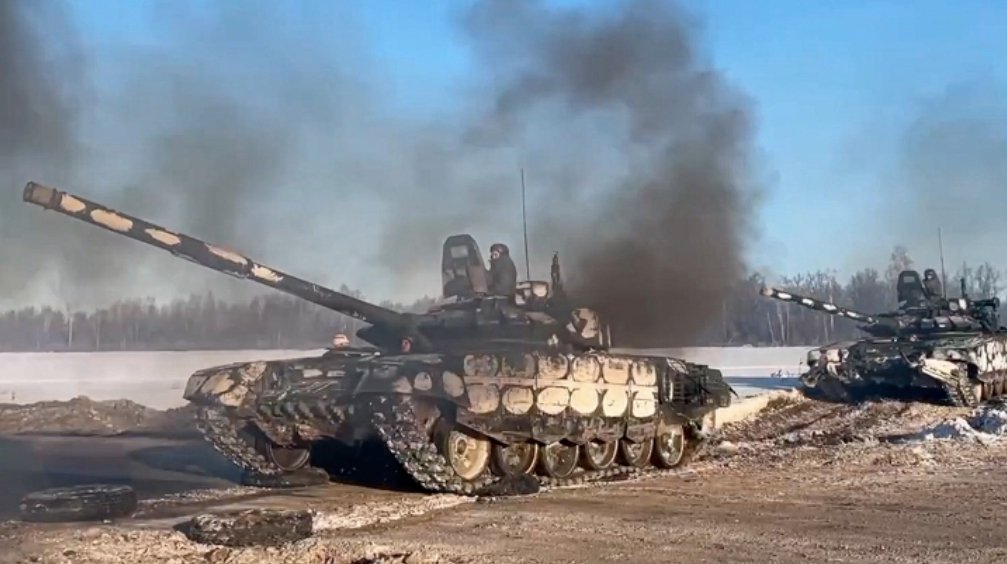 After Russian President Vladimir Putin declared war in a pre-dawn televised address, explosions and gunfire were heard through the day in Ukraine’s capital and other parts of the country, with Ukraine President Volodymyr Zelenskyy confirming there have been 137 confirmed deaths during the first day of attacks from Russia.

The assault brought a drastic end to weeks of fruitless diplomatic efforts by Western leaders to avert war over Russian demands for a redrawing of post-Cold War security arrangements in Europe.

“This is a premeditated attack,” US President Joe Biden told reporters at the White House as he unveiled harsh new sanctions, coordinated with allies, against Russian banks, state companies and oligarchs (those who gained great wealth after the fall of Communism).

“Putin is the aggressor. Putin chose this war. And now he and his country will bear the consequences,” said the US President.

Moscow launched the offensive in the early hours of the morning, shortly after President Putin’s dramatic televised address. He threatened any country attempting to interfere with “consequences you have never seen”.

In his address, Putin said he had ordered “a special military operation” to protect people, including Russian citizens, subjected to “genocide” in Ukraine – an accusation the West calls baseless propaganda.

“And for this we will strive for the demilitarisation and denazification of Ukraine,” Putin said.

Air and missile strikes rained down on cities and military bases, before tanks rolled in across three sides of Ukraine’s vast border. It followed weeks of escalating tensions, as Russia massed troops around the country.

Ukraine’s President Volodymyr Zelensky, meanwhile, vowed to continue fighting. He said “a new iron curtain” was falling into place and his job was to make sure his country remained on its western sides.

After nightfall, a picture emerged of fierce fighting across multiple fronts. President Volodymyr Zelenskiy late on Thursday ordered a general mobilization, to be carried out within 90 days, “to ensure the defence of the state”.  Mr Zelensky ordered conscripts and reservists in all of Ukraine’s regions to be called up to fight. The country’s defence minister urged anyone who was able to hold a weapon to join the effort to repel Russia.

But as night fell, fears of a Russian assault on the capital grew. Gunfire and explosions were heard in the city throughout the day and the president was quoted in Ukrainian media as saying “saboteurs” had entered Kyiv.

Western intelligence officials earlier warned that Russia was building an “overwhelming force” to take control of the city.

Ukraine’s army is trying to repel a full-scale Russian invasion, with fierce battles taking place close to the capital Kyiv.

Fighting is raging at an airfield on the outskirts of the city, and it could become a springboard for the Russian army into Kyiv if its troops seize it.

Kyiv has been hit by blasts, and at least one block of flats was damaged.

Ukrainian officials said there had been missile strikes on the city, and there are reports that an aircraft was brought down.

There was also fighting around the site of the former nuclear power plant in Chernobyl. Ukrainian presidential adviser Mykhaylo Podolyak said the nuclear site itself had been lost following a “fierce battle”.

Heavy exchanges of fire were also reported in the regions of Sumy and Kharkiv in the northeast and Kherson in the south.

The UK’s Ministry of Defence said Ukrainian forces were putting up “a staunch resistance” to the invasion but that “heavy casualties” had been suffered by both sides.

Thousands moved into neighbouring countries such as Moldova, Romania, Poland and Hungary to escape the conflict. Poland is reported to have opened nine reception centres along its 535-kilometre long border with Ukraine, expecting millions to cross.

The U.N. refugee agency said an estimated 100,000 Ukrainians had fled their homes on the first day. Thousands were crossing into neighbouring countries, including Romania, Moldova, Poland and Hungary.

“We don’t understand what we should do now,” one woman called Svetlana told the BBC. “We’re now going to a place where we can be safe and we hope we can leave safely.”

Human rights groups warned prior to the invasion that an attack could trigger a major refugee crisis in Europe.

In Kyiv, which is home to almost three million people, warning sirens have been blaring out as traffic queues to leave the city. Hundreds of people are seeking shelter for the night in metro stations, bomb shelters and basements.

Western leaders expressed shock and anger at the scale of the attack – which took place by land, air and sea – throughout the day.

The UK, EU and other allies vowed to impose tough new sanctions to punish Moscow but said they would not send in troops.

French President Emmanuel Macron held a telephone call with his Russian counterpart, in what was Mr Putin’s first conversation with a Western leader in days.

Mr Macron demanded an “immediate halt” to the offensive and threatened Mr Putin with “massive sanctions”, the French government said. The Kremlin, however, simply said the pair had a “serious and frank exchange of views”.

The highway heading west out of Kyiv, home to 3 million people, was choked with traffic across five lanes as residents sought to escape, fearful of bombardments while stuck in

The day began with missiles raining down on targets across Ukraine and reports of troops and armour pouring across the borders from Russia and Belarus to the north and east.

Zelenskiy called on Ukrainians to defend their country and said arms would be given to anyone prepared to fight.

“What we have heard today are not just missile blasts, fighting and the rumble of aircraft. This is the sound of a new Iron Curtain, which has come down and is closing Russia off from the civilised world,” Zelenskiy said.

Putin, after referring earlier in his speech to Russia’s powerful nuclear arsenal, warned: “Whoever tries to hinder us… should know that Russia’s response will be immediate. And it will lead you to such consequences that you have never encountered in your history.”

Asked whether that threat was tantamount to threatening Russian use of nuclear weapons, Foreign Minister Jean-Yves Le Drian said it was indeed understood as such, adding that Putin should also understand that NATO was a nuclear alliance.

Biden has ruled out sending U.S. troops to defend Ukraine, but Washington has reinforced its NATO allies in the region with extra troops and planes.

After consulting with the Group of Seven leading industrialised nations, Biden announced measures to impede Russia’s ability to do business in the world’s major currencies, along with sanctions against banks and state-owned enterprises.

China remained out of step, however, rejecting the description of Russia’s actions as an “invasion”.

Russia is one of the world’s biggest energy producers, and both it and Ukraine are among the top exporters of grain. War and sanctions will disrupt economies around the world already facing a crisis as they emerge from the coronavirus pandemic.

Hang Them from the Bridges

Putin said he did not plan a military occupation, only to disarm Ukraine and purge it of nationalists, and his endgame remains unclear.

But it is hard to see Ukrainians accepting leadership installed by Moscow.

“I think we must fight all those who invade our country so strongly,” said one man stuck in traffic trying to leave Kyiv. “I would hang every single one of them from bridges.”

A democratic nation of 44 million people, Ukraine is Europe’s biggest country by area after Russia itself. It voted for independence at the fall of the Soviet Union and has recently stepped up efforts to join NATO and the European Union, aspirations that infuriate Moscow.

Putin, who denied for months that he was planning an invasion, has called Ukraine an artificial construct carved from Russia by its enemies – a characterisation Ukrainians see as an attempt to erase their more than 1,000-year-old history.

While many Ukrainians, particularly in the east, speak Russian as a native language, virtually all identify themselves as Ukrainian.

There was also some dissent in Russia. Police detained more than 2,000 taking part in anti-war rallies in 53 cities and authorities threatened to block media reports carrying “false information”.

In the southeastern port of Mariupol, near a frontline held by Russian-backed separatists in eastern Ukraine, local authorities said 26 people were wounded in shelling.

Civilians packed bags. “We are going into hiding,” a woman said.

Russia’s defence ministry said it had destroyed 83 land-based Ukrainian targets and had achieved all its goals, according to Interfax news agency.

Protests against Russia’s invasion were held in Europe and the United States. At a demonstration in New York’s Time Square, Ivana Lotoshynski, who was born in Ukraine, urged solidarity with Ukrainians.

“People are losing their lives right now. Ukrainians are fighting against this regime from Russia and it’s really devastating,” she said. “Today I think everybody is Ukrainian.”