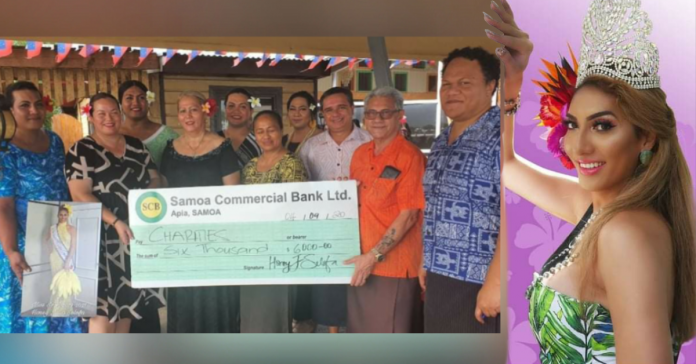 Miss Samoa Faafafine Association Honey Julia Solofa has made a donation of $6,000 tala distributed to six of her favorite charities in Samoa in commemoration of the one year anniversary of her reign.

The Samoa Faafafine Association are well known for their community work in Samoa with donations to charitable organisations presented every year, following their annual Miss Faafafine Pageant.

With COVID-19 restrictions the association has had to cancel the pageant which was their main fundraising activity of the year.

That is where Miss Honey Julia Solofa stepped in to offer her personal support and ensure the annual donations are still made by the Association, despite the current economic times.

Writing from New Zealand where she is currently working and had fund raised for this initiative, Miss Samoa Faafafine 2019-2021 says this is an opportunity to support six NGOs she greatly admires for their work in Samoa.

“In commemoration of my 1 year Anniversary, and extended tenure as your reigning Miss Samoa Faafafine Association, I have hand-picked 6 organisations very dear to my heart, to receive a humble gift as recongnition of my sincere gratitude for the heart they pour out into our beautiful Samoa”;

“During these unprecedented times we often ask ourselves, what more can we do for our communities to help lighten the load, and ease the strain brought about by this pandemic?”. 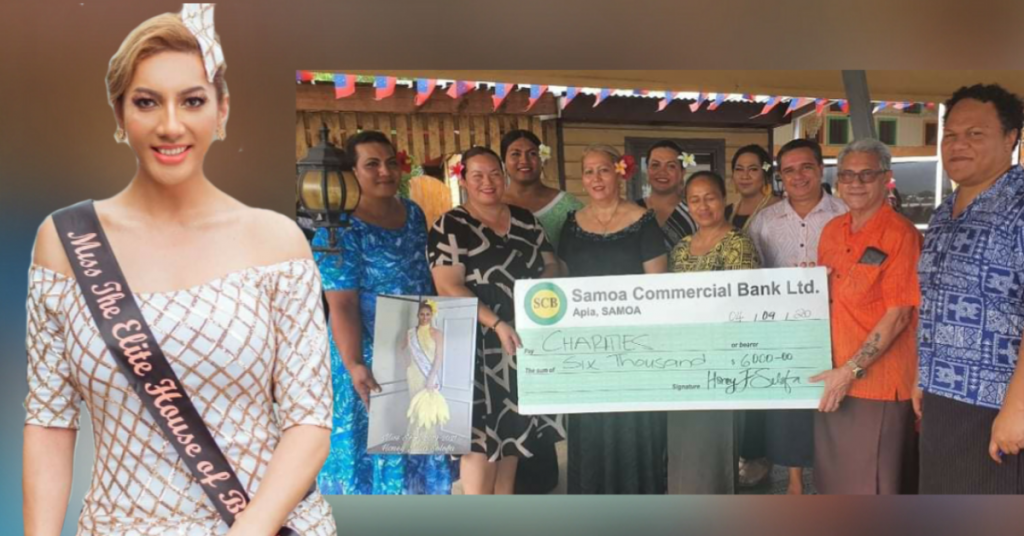 A special ceremony was held by the Samoa Faafafine Association at the Edge Marina Bar in Matautu yesterday afternoon where Honey’s mom, Afioga Mataia Gaonotele Julia Schmidt-Solofa, presented the cheques to charity.

“The uncertainty and disruptions caused by the global pandemic has also affected our Samoa Faafafine Association, however, we have been inspired by the way our reigning Miss Faafafine has stepped in to make this possible..;

“We are thankful to our reigning Miss Faafafine le Afioga ia Honey Julia Solofa, her mother who is here with us, as well as her siblings and family”, said Su’a.

“The truth is, we would not have been able to make any donations this year if it weren’t for Honey.”

Mataia Gaonotele Julia Schmidt-Solofa spoke at the event and said this was a great way for Honey to celebrate her reign.

“This is a wonderful way for Honey to give back to the community in honor of her time as a Miss Faafafine. I am also blessed by Honey’s kind heart, to send this monetary gift.., and it is equally distributed with $1,000 tala each”.

Afioga Letaa Dan Devoe spoke on behalf of the six organisations to thank the President and members of the Samoa Faafafine Association.

Letaa said that during these uncertain times of economic hardship, Samoa’s non government organisations are grateful for any and all donations made.

“Thank you to Afioga Honey Julia Solofa, and her family. Faafetai tele to the Samoa Faafafine Association”.