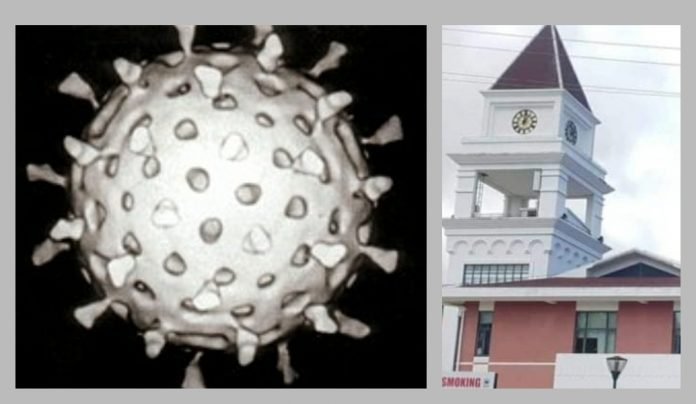 The Ministry of Health has declared a diarrhoeal outbreak in Samoa due to “rotavirus” reporting 31 cases as of 22 July 2021.

Private doctors contacted by Samoa Global News say it has been evident for about two weeks however their clinics were awaiting lab tests to confirm.

“The treatment is preventative and symptomatic; good general hygiene and sanitation, and ensure clean food preparation and fresh food produce are used.”

Rotavirus is genus of double-stranded RNA viruses in the family Reoviridae. Rotaviruses are the most common cause of diarrhoeal disease among infants and young children. Nearly every child in the world is infected with a rotavirus at least once by the age of five. Immunity develops with each infection, so subsequent infections are less severe; adults are rarely affected.

There are nine species of the genus, referred to as A, B, C, D, F, G, H, I and J. Rotavirus A, the most common species, causes more than 90% of rotavirus infections in humans. Rotavirus E, which is seen in pigs, has not been confirmed as a distinct species.

The statement issued by the Ministry of Health outlining the seriousness of the outbreak and offering important advice for parents is published below: 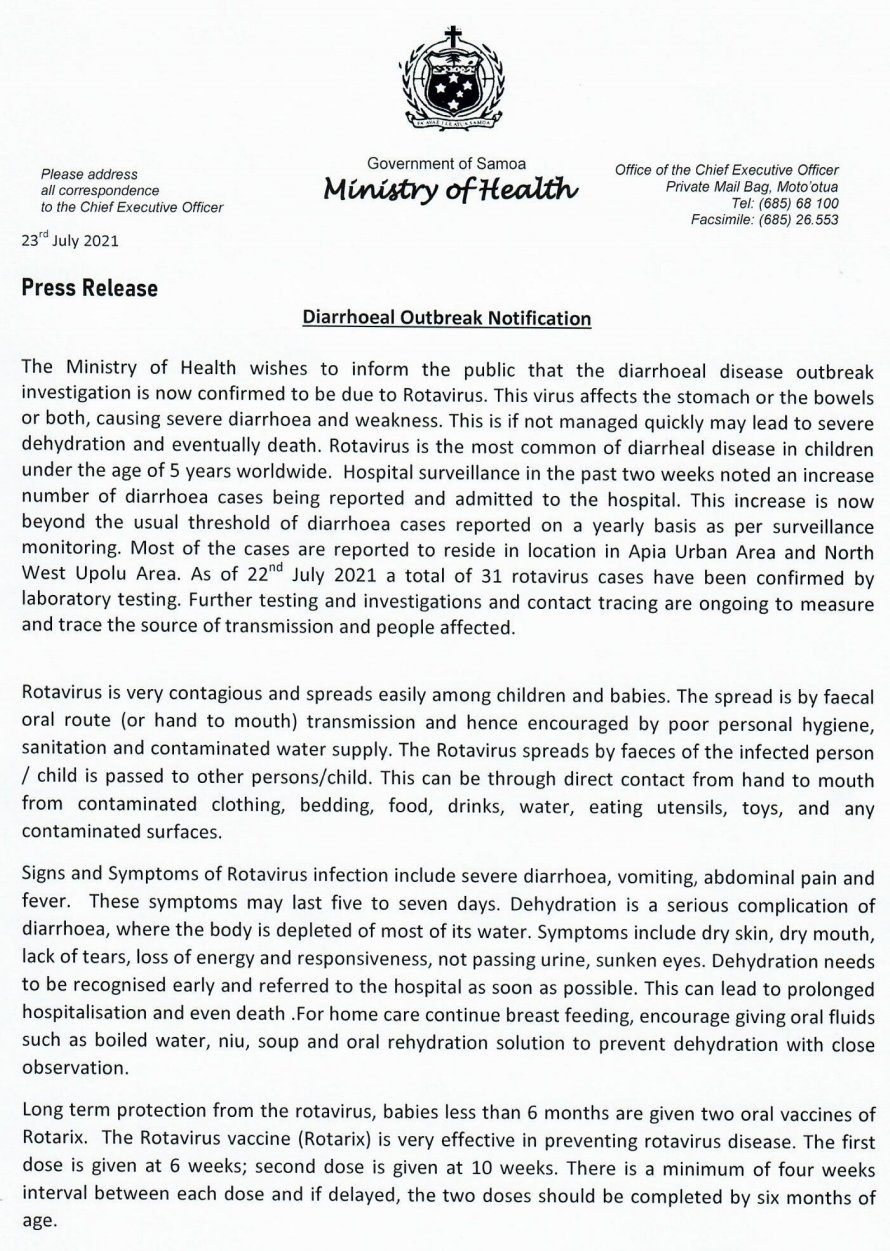 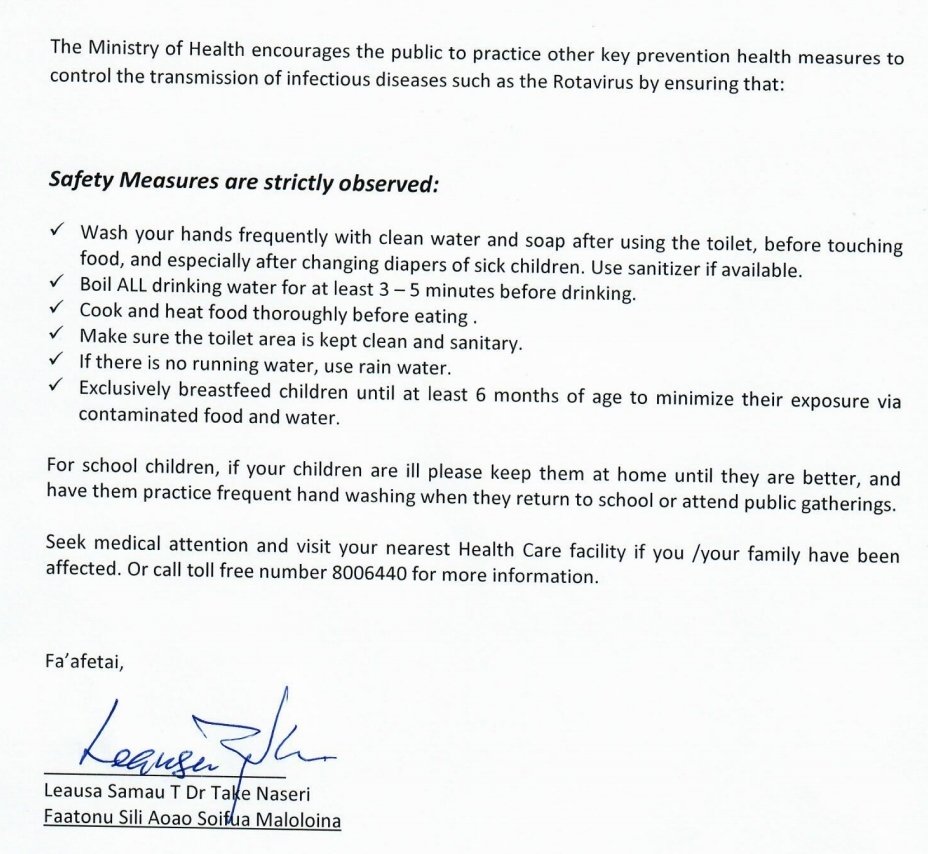 Diarrhea is the second leading cause of death in children Under 5 years.  Vaccinate your child with Rotavirus vaccine.

WHAT IS ROTAVIRUS❔
✅Many germs can infect the stomach/gastrointestinal tract causing diarrhoea.
✅The Rotavirus is the most common germ that can cause such diarrhoeal illness.
✅The virus is very contagious and spreads easily among children and babies.

HOW ROTAVIRUS SPREADS:
✅The Rotavirus spreads by fecal-oral route or when the virus from faeces of an infected person/child is passed to the other person/child.
✅This can be through direct contact from hand to mouth from; ☑contaminated clothing
☑bedding
☑food,
☑drinks
☑ eating utensils
☑toys
and general contact surfaces.

HOW IS ROTAVIRUS PREVENTED❔
✅The Rotavirus vaccine (Rotarix) preventing rotavirus disease up
to 5 years of age.
✅This vaccine has been in use for many years around the world
and it is a safe and well tolerated vaccine.
✅Vaccination should be integrated with other key prevention
health measures such as washing hands thoroughly with soap before preparing and eating food, after using the toilet, drinking
boiled, filtered or chlorinated water, disinfection of general.

WHO ARE AT RISK OF ROTAVIRUS DIARRHEAL DISEASE❔
✅Infants 3 months of age and older.
✅Children who have a weak immune system.
✅Unvaccinated children

WHY VACCINATE YOUR CHILD AGAINST ROTAVIRUS DISEASE❔

These symptoms may last for five to seven days.

A serious complication of this infection is dehydration where the body is depleted of most of its water.

This can lead to prolonged hospitalization and even death. Dehydration needs to be recognized and treated by a doctor as soon as possible.

Symptoms of dehydration:
• Thirsty
• Dry mouth, skin
• Very tired or lethargic
• Weakness
• Not peeing or in babies not having a wet nappy for a long time
• Have sunken eyes
• Sunken fontanelle or soft spot in a baby’s head.

PROTECT YOUR CHILD FROM ROTAVIRUS DIARRHOEAL DISEASE. VACCINATE YOUR CHILD WITH TWO DOSES OF ROTARIX VACCINE AT 6 AND 10 WEEKS OF AGE.

FACTS ABOUT ROTARIX VACCINE.
✅This is a two dose vaccine and is given orally.

✅There is a minimum of four weeks interval between each dose and if delayed, the two doses should be completed by six months.

🔵Visit your nearest Health care facility or hospital
Monday to Fridays.
9AM – 5PM

🔵The TTM EPI clinic at Moto’otua is open on Saturday mornings.