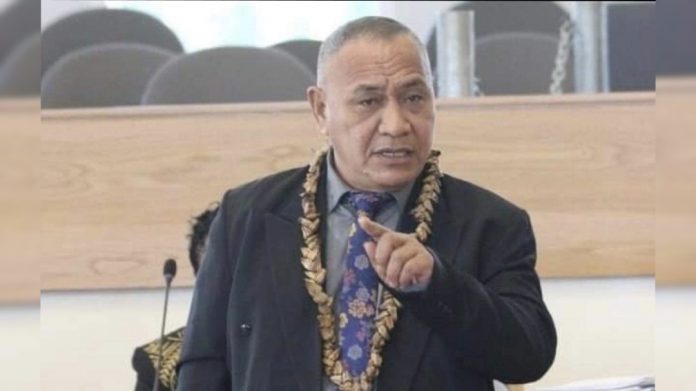 The issue was first raised with the media by former Prime Minister and opposition leader, Hon Tuilaepa Sailele Malielegaoi during the party’s weekly press conference last Thursday. According to Tuilaepa, Olo has been assigned two vehicles – a Prado assigned to Ministers, and the Landcruiser in question. Tuilaepa said the Toyota V8 landcruiser had also been assigned private number plates.

When contacted for a response last week and through the weekend, the Minister of Works said he was very busy, and referred SGN questions to his media officer.

However, speaking with freelance reporter Autagavaia Tipi Autagavaia on Sunday evening, Olo Fiti Vaai said the landcruiser was first proposed to be purchased by the Samoa Airport Authority (SAA), however, unutilised MWTI funds from the Waterfront project were later approved for the purchase.

The Minister goes on to explain on the radio interview that $50,000 tala was then provided by the Samoa Airport Authority, to deposit a landcruiser for his use, to be procured from a company in Australia.

According to the Minister of Works, he was then told by MWTI that there were savings from the New Zealand government-funded Waterfront Project, to be returned if not utilised by the end of June.

This prompted the decision to reallocate those savings for the vehicle purchase, and hold off on what would have undoubtedly been a burden upon the cashflow-stricken Samoa Airport Authority.

Regarding the private license plate, Olo says many government vehicles purchased under funded projects, are fitted with private plates.

In a press release issued on Monday, opposition leader Tuilaepa said government policy requires vehicles for members of Cabinet to be ordered through their Ministries, and not through Corporations.

Tuilaepa said the business of Corporations is vested in the Board of Directors under the Minister in charge, and Ministers should not be allowed to order vehicles through the State- Owned Enterprises.

“When government and all car owners struggle with the high cost of fuel, it seems strange that the Minister of Works should be allowed to become extravagant with the use of public funds,” stated Tuileapa.

Olo hit back at the opposition, saying he should have given them lessons on how to raise issues constructively. Olo also alleged that 13 V8 vehicles priced at $300,000 tala each were in the process of being purchased for the Cabinet when the new government took over. “And we stopped that,” said Olo.

Olo stressed the importance of having the appropriate vehicle, as MWTI Minister, to conduct site visits to all infrastructural developments across the country.

Members of the public from the constituencies of Lepa and Vaitele may be caught in the cross-fire of politics, with the Minister stating that if the opposition members do not agree with the purchase of his V8 landcruiser, then he would consider not visiting those constituencies.