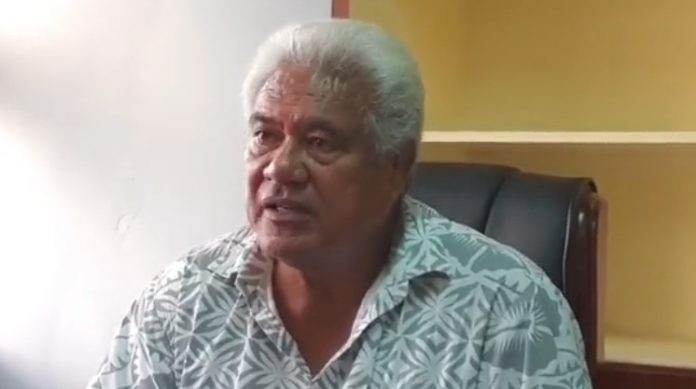 24 August 2021 Apia Samoa. The Minister of Police, Prisons and Corrections Services, Hon Faualo Tauiliili Harry Schuster said village councils across Samoa play an important role in the community, however, they are also reminded that their actions are not above the law.

“That is not acceptable. It is not tolerated under the Law, and it is also not tolerated in our Samoan customs and traditions,” stressed the Minister of Police.

The Minister was responding to questions from Samoa Global News regarding two recent incidents where villages had allegedly acted against the law.

Village Rule vs The Law

In an exclusive interview on Monday afternoon, Faualo was able to confirm that the two Salelologa men arrested following roadblocks to an HRPP approved car rally, were in fact charged with pointing firearms (ta’i le fana) towards persons.

The Minister said the evidence against the two taulelea is that they were seen by police pointing firearms while officers were carrying out their duties to negotitate with villagers, and settle the disruptions that arose in Savaii.

In another incident at Faleu Manono, village taulelea allegedly destroyed a family’s home and business property in a stoning incident that left a couple and their five children running for their lives in the middle of the night. They returned the next morning to find their five bedroom home ransacked and all their belongings stolen.

Atalelei Fa’apito, her husband and children have lost everything and have been forced off their land. They now live in a faleoo on a relative’s property at Tanumapua. Atalelei says her teenage children are withdrawn and showing signs of post traumatic stress from what they went through. They await police investigations into the incident and want justice for what has happened to them.

The Minister of Police and Prisons says Village Councils should lead as law abiding citizens.

“We should appreciate that the law is there to protect all citizens and Police should be allowed to enforce the law and maintain the peace and security of all Samoans..

“As I said before, we cannot use our power and authority to rule over villages, as an excuse to break the law or stop legal action towards those who break the law.”

Faualo said such behaviour and actions are not only unlawful, they are against Samoan custom.

“When we break a Samoan custom or tapu, there are consequences and we all know this..

“So it is the same with the rule of law set by government authorities, where committing an offence has its consequences under the law”, said the Minister.

Faualo said he did speak to the Member of Parliament for Salelologa who is also the Minister of Justice, Matamua Vasati Pulufana. “The village should understand that the police are doing their job and whoever is alleged to have broken the law should face the consequences”.

In relation to the incident at Faleu Manono, police investigations are proving difficult with no witnesses willing to come forward, and no villagers wanting to cooperate with police or assist with their investigations.

Sāmoa has approximately 200 traditional villages (nu’u); these are traditional polities governing
a group of extended families within a territory, which typically extends from the top of the central ridge of mountains to the coast (Meleisea et al 2015: 20). Local government in Sāmoa is based on the institution of fono (village councils) made up of matai who represent the families of the village. A matai is the head of an extended family or clan, identified by a title (an ancestral name) belonging to
that family. The term matai is sometimes translated as ‘chief’. Each village has a unique traditional honorific salutation (fa’alupega) that alludes to (and thus defines) the rank and status of the matai titles of the village. The fono makes decisions based on consensus and following discussions in which
all matai have the right to express opinions. For liaison with the national government, each fono elects a village representative (Sui o Nu’u).

In most villages there is a lower level of local government
comprising village women’s committees (komiti), which is represented by an elected Sui Tama’ita’i and associations of untitled men (aumaga) who are subordinate to the fono. This system is often referred to as ‘fa’amatai’ and is widely believed to be the foundation (fa’avae) of Sāmoan custom and tradition. Village governments have considerable power and authority in setting priorities for the provision of health and education services, water supply, agricultural development, business operations, land use, customary observances and maintenance of law and order. Decisions made by the fono can be challenged at the Land and Titles Court and citizens are in principle, able to report criminal matters to the police, but many choose to abide by the decisions of the fono.