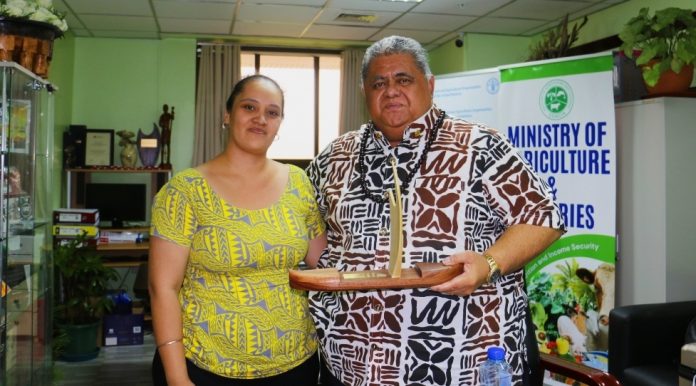 The Star of Oceania award was presented at the Hawaii Conference Center. last week on the 17 October.

Hon. Minister Laaulialemalietoa was nominated in recognition of his leadership as a government Minister, affirming Samoa as a preeminent breadfruit nation of the world.

The Hon. Minister was not able to attend the Stars of Oceania event in person due to competing parliamentary and Ministerial duties, and was officially presented with the award in his office on the 27th October 2022.

The Star of Oceania is a tri-annual event inaugurated in 2006 by the Pacific Business Center Program (PBCP) organized under the University of Hawaii Office of the Vice President for Research and Innovation.

Through the Star of Oceania event, PBCP strives to honor extraordinary individuals, organisations, and institutions for their service and/or organizational contribution to the healing and health of the planet and humanity.

The Samoan government endeavours to continually promote agriculture and food security, and hosted the Samoa Global Summit in 2017.

Since then global interest has established investments in agricultural developments.

Samoa continues to advance its developments in food security under the Ministers leadership to drive community engagement and interest in local produce.