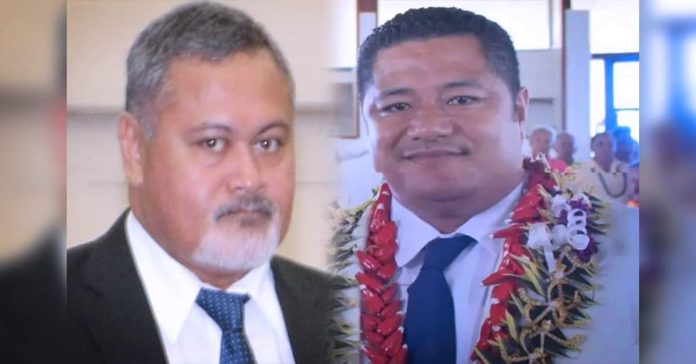 In a historical first for Samoa, Parliament exercised its powers under S68(5) of the Constitution to vote on the fate of a member of Samoa’s judiciary after Fepuleai was convicted by the Court of Appeal for striking the Ministry’s nightwatchman Saili Leota twice on the head with a beer bottle.

18 Members of Parliament voted against the motion to remove Fepuleai as put forth by Prime Minister Tuileapa Sailele Malielegaoi and seconded by the Deptuy Prime Minister Hon Fiame Naomi Mataafa.

Members who voted against the motion included the Minister of Justice and Courts Administration Faaolesa Katopau Ainuu and his Associate Minister Sooalo Mene, who had been a member of the Judicial Service Committee (JSC) who suspended Fepuleai.

S68(5) of the Constitution states that, “A Judge of the Supreme Court shall not be removed from office, except by the Head of State on an address of the Legislative Assembly carried by not less than two-thirds of the total number of Members of Parliament (including vacancies), praying for his or her removal from office on the ground of stated misbehaviour or of infirmity of body or mind.”

A Parliamentary Special Inquiry Committee selected to receive submissions and assess the issues reported back to Parliament with the recommendation to not remove Fepuleai.

Before the vote Special Inquiry Committee Chair Nafoitoa Talaimanu Keti addressed the Legislative Assembly for over an hour, to explain the reasoning behind their recommendation to not remove the suspended President of Lands and Titles Court.

The Chair of the committee said that their recommendation to not remove the LTC President was based on their assessment of all submissions made to them by various groups and individuals including the Samoa Law Society, the Office of the Attorney General and the Acting Chief Justice as well as Fepuleai himself, who according to Nafoitoa, had cried before the Committee and showed genuine remorse.

“The Attorney General’s Office advised on the Rule of Law, he is coming from the notion that all persons are equal before the Law and entitled to equal protection under the Law,” said Nafoitoa.

“The Acting CJ advised on the integrity of the Judiciary, but he also said that there was a huge backlog of cases now at the LTC,” said Nafoitoa.

The Chair of the Special Committee concluded by saying that S15 of the Constitution that refers to “all persons are equal before the law and entitled to equal protection under the law” and S68(5) are not related.

The Prime Minister moved a motion to remove the President of the Lands & Titles Court on the grounds of misbehaviour as outlined in S68(5) of the Constitution which was seconded by Hon Deputy Prime Minister Fiame Naomi Mataafa.

“Under the Constitution, Parliament has the power to decide the fate of the Prime Minister, Speaker of the House, and any Judge in regards to alleged wrongdoing in their performance”.

The Prime Minister then confirmed that the ruling HRPP party has called a conscience vote, allowing each Member of Parliament to vote on moral grounds, and seek to represent the opinion of their constituents.

The Pime Minister reflected on previous times when the Legislative Assembly had taken a conscience vote, and he as the Minister of Finance had voted differently to then Prime Minister Tofilau Eti Alesana.

“The bill to establish Lotto Samoa was passed in this House by 17 votes to 16; and the Prime Minister voted against it;

“And that is the way of this party, to uphold human rights, and today, each Member should vote with their conscience,” said the Prime Minister.

Given the opportunity to deliberate, Members of Parliament showed different views, most quoting biblical texts, and Samoan cultural practices to justify the way that they had decided to vote.

Member of Parliament of Vaimauga Sasae Sulamanaia Tauiliili Tuivasa spoke in support of the Special Committee’s recommendation to not remove Fepulea’i as LTC President, linking the issue to rulings within a village council setting. He added that youth are becoming less disciplined, not listening to elders.

Faumuina Wayne Fong reminded the Legislative Assembly that they were the ones who set down the Laws, which the Judiciary and the Courts now uphold. He supoorted the motion to remove Fepuleai.

Gatoloai Amataga Alesana-Gidlow said that the issues decided in Parliament are different from those being decided at the Village Council level, and spoke about the spirit of forgiveness, faith, hope and love. Gatoloai voted against the motion and supported Fepuleai’s return.

Lealailepule Rimoni Aiafi who attends the same church as Fepuleai quoted their Church Minister’s sermon last Sunday, quoting the prophet Isaiah that requires us to come to the aid of those in need. Leailepule says that this is an easy decision for him because the victim has already forgiven Fepuleai, and judgement comes from God alone.  Lealailepule insisted that there is no correlation between Fepuleai’s conviction and the performance of his job as a Judge.

Member of Parliament from Falealili i Sisifo Leavasa Sili’ili’ili Aumua Isaia Lameko said that it was not an easy decision, but that he supported the spirit of forgiveness and the giving of a second chance to Fepuleai, quoting John 8:32.

Moefaauo Sepulona Moananu supported the motion to remove and also quoted biblical text, “Seek ye first the kingdom of God, and his righteousness”, saying that it was the role of Paliament to seek after what is righteous.

Deputy Prime Minister Fiame Naomi Mataafa stood to remind the House that the motion before Parliament to remove the President of the Lands & Titles Court was a Government motion, and in supporting the motion to remove Fepuleai, she strongly rejects the report of the Special Committee.

“I reject it because they are saying that the criminal acts committed by the President do not relate to the performance of his work;

“If we follow this Committee’s report, then we are saying that Judges are allowed to murder, to rape, to commit burglary and theft.. because those acts are not related to the performance of their work!?”

“What if Fepulai had hit the night watchman’s head, and he died? Would we still allow him to stay on?”

“I am shocked that a Parliamentary Committee can bring a decision of a lower Court to suppprt their recommendation when there is a decision handed down by the Court of Appeal.”

The Deputy Prime Minister spoke strongly in Parliament to reject the Committee’s position that their recommendation does not breach Section 15 of the Constitution.

“What message will we be sending?” said Fiame.

“That is it ok for Fepuleai because of his long service to Government? That it is ok because he served us here in Parliament?”

“Mr Speaker, that is the message we will be sending if we follow the recommendation of this committee..”

Before the voting count was conducted, the Prime Minister stood to clarify that 34 votes were needed to achieve a two thirds majority of the 50 Members of Parliament and remove the LTC President.

Members of Parliament who voted to support the motion to remove the LTC President under s68(5) due to misbehaviour as confirmed by a conviction by the Court of Appeal:

Members of Parliament who voted to reject the motion, and support the LTC President returning to continue his duties as a Judge: