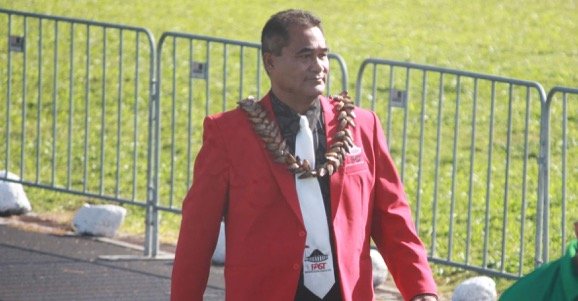 In a special announcement made this evening on the FAST Party Facebook Page live, Hon Fiame said Minister-elect of the Ministry of Environment and the Ministry of Tourism Toeolesulusulu Cedric Salesa Pose Schuster has resigned from what could have been his first Ministerial portfolio for the Faatuatua i le Atua Samoa ua Tasi (FAST) Party.

“I have here with me the letter by Toeolesulusulu; he wishes to resign as Minister-elect as he wants to uphold his integrity and clear his name,” she said.

The Member of Parliament for Aana Alofi No 4 who was also announced by FAST as their Minister Elect for the two major portfolios of Environment and Tourism was arrested for traffic offenses Tuesday night following an Independence and Anniversary celebration at Maota o Samoa.

Honourable Fiame says that as a leader she accepts Toeolesulusulu’s resignation letter.

The leader of FAST says one of the founding principles of the party is to uphold the highest level of respect for the Rule of Law.

“We also believe in the principle that anyone charged with an offense is innocent until proven guilty,” said Fiame.

Fiame said the now former Minister-elect of Environment and Tourism, Toeolesulusulu Cedric Schuster is a man of integrity.

Fiame added Toeolesulusulu has the full support of his party whilst awaiting the court process.

Police have launched an internal  investigation into a leaked booking photograph of Toeolesulusulu posted onto the HRPP supporters page on Wednesday.

Toeolesulusulu says his resignation ensures the integrity of the Ministerial position is protected as he works through the Court procedure.

Resignation as Minister for MNRE and Tourism

I want to firstly extend my gratitude and appreciation for your confidence in my abilities that you selected myself a one of Ministers for your cabinet.

But, due to the pending case against myself regarding driving under the influence, I hereby wish to tender my resignation as a member of the Cabinet.

I want to extend my sincerest apologies for the circumstances that eventuated and how this has affected not only your good name, but that of our FAST family.

Whilst awaiting the court process, I do continue to pledge my full support to your leadership and to our FAST family.