Saturday 28 August 2021, Apia Samoa. Samoa’s Minister of Finance Honorable Mulipola Anarosa Molioo, has issued a press statement to say she has “reluctantly decided to accept” the resignation of the Ministry’s Chief Executive Officer, after sending him a letter that according to the CEO, had asked for his resignation.

Prior to this statement the Minister had set aside suggestions that Leasiosiofaasisina Oscar Malielegaoi had been terminated.

“Please ignore such misinformation, which does a disservice to both the CEO and myself”, the Minister said in a press statement.

On Thursday afternoon, a post on the official pages of HRPP stated the CEO of the Ministry of Finance had been “terminated”.

Questions were immediately put to the Honorable Minister of Finace Mulipola Anarosa Ale Molioo to please clarify the status of the CEO’s position, given the uncertainty and turbulence stirring amongst Samoans on social media, especially in view of the recent political crisis.

The Minister’s response came by way of a statement which SGN did not receive until the next morning.

Mulipola advised the public to ignore the “misinformation” which is “a disservice” to both the CEO and herself as the Minister.

“It has come to my attention that there are rumours circulating (on social media especially) regarding the employment status of the CEO of the Ministry of Finance.

“Please ignore such misinformation, which does a disservice to both the CEO and myself.

When this statement was received, the Minister was asked by SGN: “Dear Minister, does this statement mean Leasiosio has not been asked to step down, and that there is no intention to remove him from the post before the end of his current term?

Hon Mulipola Anarosa Molioo did not respond however, the answer was given by the CEO himself when, within hours of the Minister’s “ignore all that misinformation” statement, the 13 divisions and 300+ staff of Samoa’s Ministry of Finance are seen sworming to the 6th floor conference room of the Central Bank building in Apia, to farewell and have final briefings with their CEO and much-loved colleague.

Leasiosiofaasisina reveals in his farewell speech to his staff that he was given a letter from the Minister of Finance on Thursday 26th, with options that effectively made Friday 27th August 2021 his last day in a Ministry he has worked in, for over 18 years.

“Yesterday I received a letter from the Minister,” says Leasiosio as he fights to hold back tears. “Today is my last day in the Ministry, as it was an “asked to resign” letter, effective today at the close of business”. 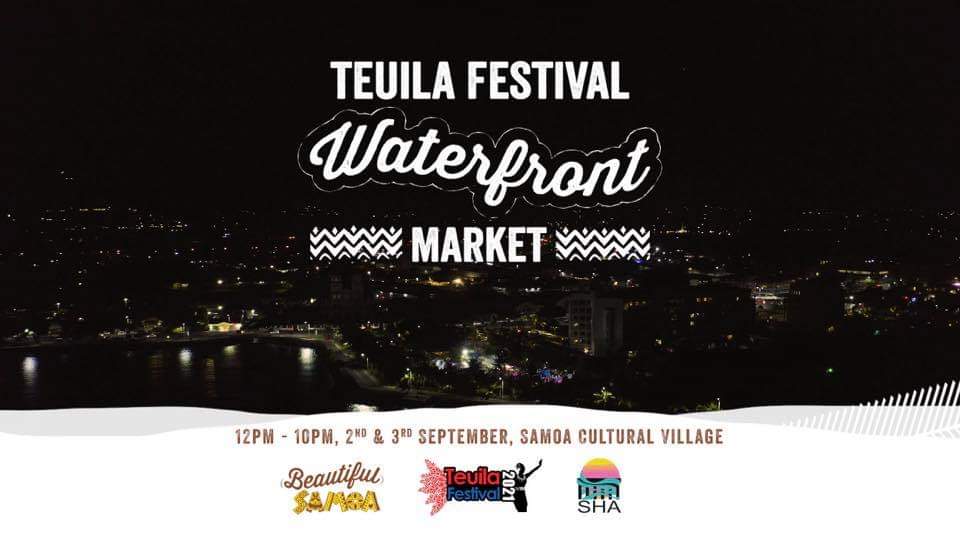 Leasiosiofaasisina who has a reputation for being highly composed and focused, is seen breaking down as he farewells the Ministry he referred to as his family since graduating University in 2003.

For the next 15 hours, unsuccessful attempts were made to get a response from the Honorable Minister, who had just hours earlier told the public that the “misinformation” about the fate of the country’s Head of Finance should be “ignored” because it was a “disservice” to her as a Minister to even consider the rumours on social media.

After midnight Friday the Minister did finally issue the statement below. 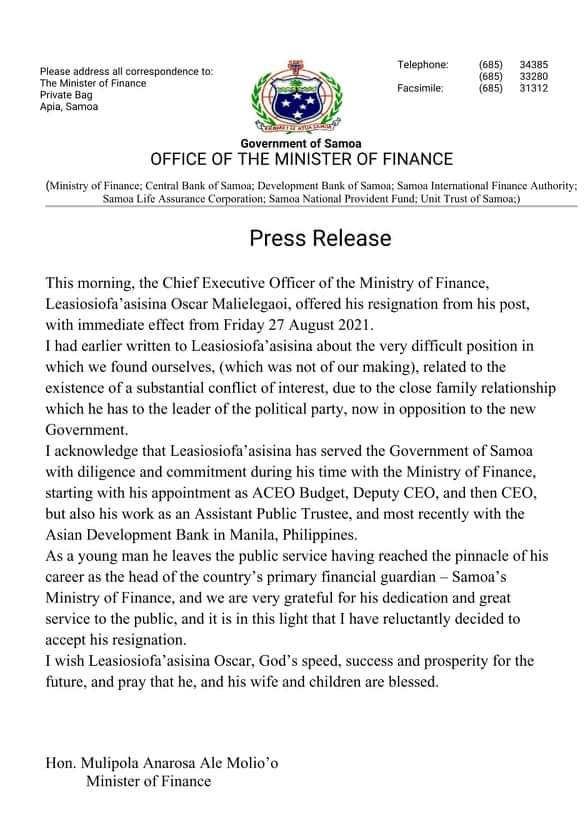 Hon Mulipola confirms she did write to Leasiosio, but does not say what the conditions laid out in the letter had been, except to reiterate again the diffiult position she is in due to the “close family relationship” which the Minister acknowledges “was not of our making”.

The Minister also acknowledges Leasiosio’s years of commitment and dedication, and then ends by stating she has “reluctantly decided to accept his resignation”.

Nowhere in the statement was there mention of any concerns about Leasiosiofaasisina’s performance.

Leasiosiofaasisina Oscar Malielegaoi was appointed by Cabinet in late 2018 to the role of Chief Executive Officer for the Ministry of Fiance. His contract term would have ended in December 2021.  A member of Samoa’s Institute of Accountants, Leasiosio has close to 20 years experience in the Finance sector. He first joined the Ministry in 2003 and worked his way from an Accounting Technician to the ACEO responsible for compiling the Budget, to eventually lead the Ministry after a term as Deputy CEO. Leasiosio had also served abroad as a Director’s Advisor to the Asian Development Bank.

No Official Notice on Fate of Samoa’s Chief Financial Advisor

Minister of Finance Responds to “Misinformation” about Chief Financial Advisor

CEO tells Ministry staff he was asked to resign