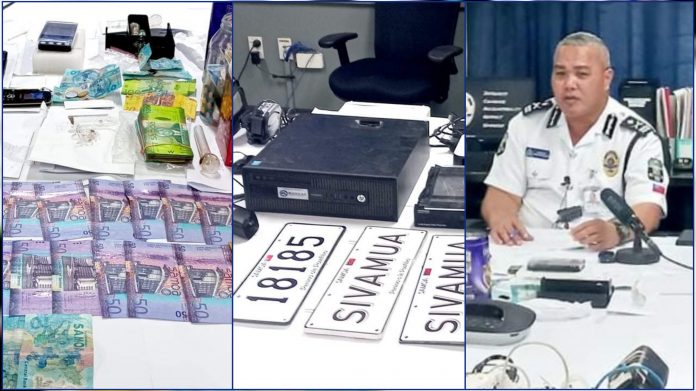 An IT Officer within the Ministry of Education Sports and Culture (MESC) were among four men arrested in a police drug raid of a Faatoia home on Thursday.

Police Commissioner Auapaau Logoitino Filipo said the public servant was a first offender, while two of the men arrested had previous drug-related convictions, including the owner of the Faatoia home.

“One of these men, the owner of the residence raided today, was preciously convicted and sentenced to 6 weeks,” said Auapaau.

The Commissioner expressed concern that those convicted were just serving out time, and returning to the drug trade without remorse or intentions to change.

“We raided his home before, but he wasn’t home.. this time we’ve caught him at home”.

The same Faatoia home was raided by police in January of this year. Utensils, $5,000 tala cash, four asildenafils 100mg per tab (viagra), an electronic scale, two rifles and ammunition of 22 bullets, as well as fake number plates were seized in January.

Six months later, very similar items have once again, been confiscated by Police.

“We seized 3.25 grams of methamphetamine, utensils, illegal firearms and cash of ST$5,250 and $50 Australian dollars,” said the Police Commissioner.

Various items of value such as laptops, cameras, air compressors, water blasters and other items seized, are suspected to be stolen goods.

Auapaau said police investigators will be matching these items against public reports of burglaries.

The four men have been with possession of drugs as well as illegal weapons. They will remain in police custody until their first appearance in Court set for 22 August 2022.