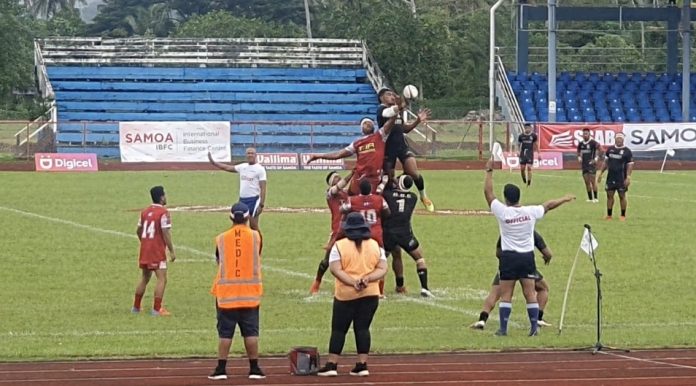 Vaiala Blackies edged out Laulii Lions in their quarter final match by 29-12. Vaiala featured young stars Steve Rimoni, Malo Luteru and Fuli Fanaufouina, but it was the experience of Alatasi Tupou and Hugo Fata that settled the side to beat the 33rd Champions, Laulii.

Apia Maroons, with no player in the National 7s squad beat Pacific Ezy Safotu in a close 17-10 quarterfinal. They will now meet Blackie in a much anticipated semi final.

Afa Aiono was leading the pack from Safotu and looked to be coming out of retirement in good form.

The closest quarter final was against hosts Vailima Marist and national champs Tepatasi from Aleipata. The match was tied at 12-12 at full time. After two sudden death swap overs, Manu Samoa 7s co-captain Melani Matavao kicked a field goal to edge the hosts to the semis.

In the fourth quarter final match Tamauli from Salelologa eased their way into the semis with a 22-7 win over Vaimoso.

All of the Manu Samoa 7s squad are playing for their clubs in the competition and head coaches have announced they will be looking out for players who put their hand up for selection.

If you can’t get down to Apia Park, TV1 Samoa is streaming all matches live.