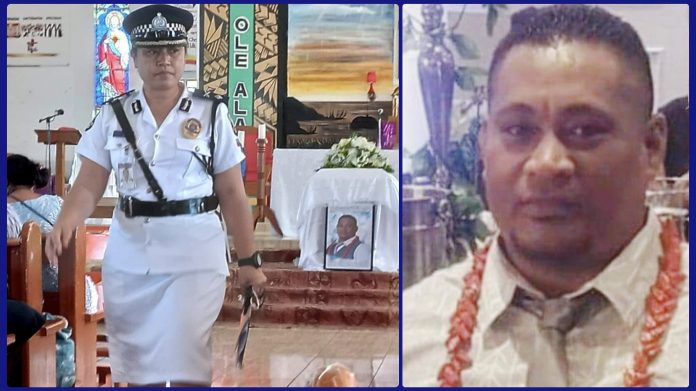 One of the three members of Samoa’s Police Asset Management Division who died in a tragic road accident last month has been remembered as a committed and conscientious worker, whom the Ministry relied upon for all building and renovation work.

Deputy Commissioner Papalii Monalisa Tiai-Keti delivered the ministry’s eulogy, describing a worker who had been given elevated responsibilities because of his high work ethic.

Papalii said Muagututia Aniterea was trained to assist with police operations, having been identified as one of the civilian members of the service who could carry out supportive duties. “As a driver, he was licensed to drive all types of vehicles, and was also able to help during police operations when extra drivers were needed,” said Papalii.

“Aniterea was a talented builder and conscientious worker, and the Ministry relied on him to lead all our building maintenance work in Upolu as well as Savaii,” said Papalii.

Papalii said Mugututia was a team player, always supportive of the Ministry’s activities and also very talented on the soccer field as a member of the police team participating in the annual business house tournament.

Muagutut’ia Aniterea and two other officers died tragically on March 15th when a dyna carrying a load bound for the Poutasi police depit, lost control on the slippery roads along the Tiavi cross-island road near Siumu, and overturned.

Muagututia had been with the service for almost two years, and was 42 years old. His wife, Hanah Lomitusi Tamapua said losing her husband is devastating for herself and their six young children.

Muagututia had four brothers and two sisters. He is survived by his siblings, his mother Faato’a Sua, his wife Hanah and six children.