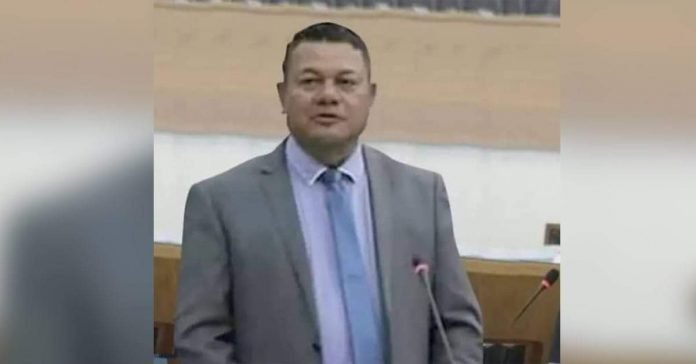 The Member of Parliament for Urban West Faumuina Leatinuu Wayne Fong has come forward to apologise on behalf of the youth of his electoral constituency now in custody in relation to the invasion robbery that resulted in the death of a Chinese national during an alleged home-business invasion attack on Saturday night.

“My deepest condolences and apologies to the Chinese Community in Samoa especially the family of Mr Cao Yaqunh and the Pacific Trade Industrial employees who were injured;

“Our Faleata Constituency are greatly saddened by this horrible incident and we sincerely hope it will not happen ever again.”

Faumuina reiterates the issues of unemployment, lack of education and poor upbringing as contributing factors to the behaviour of the youth involved.

“Those are the social issues facing youth in the urban areas such as ours, they contribute greatly to what has happened;

“I pray that this will not happen ever again,” added Faumuina.

A former businessman himself, Faumuina stressed the district’s support for Chinese and foreign companies who offer employment to Samoa.

‘I just want to clarify something, Faleata Constituency supports Chinese Companies in Faleata and across Samoa;

“I don’t believe that this is a hate crime and we don’t hate Chinese;

“They have helped our economy tremendously and I know of many Samoan who love and respect our friends from China, many of them now married to Samoan nationals.”

Faumuina observed that the influx of Chinese businesses has replaced the employment gap left by the exodus of Yazaki.

“They have more or less replaced Yazaki since they pulled out, by providing employment for a lot of our people, so hate, I believe is not the reason,” stressed the MP for Urban West.

As a solution going forward, Faumuina Leatinuu also mentioned the crucial role of Village Councils and Churches as well as Members of Parliament.

“My suggestions is for the village council to step up their power and authority in the village and bring these boys under their wing as taulelea (untitled men);

“Village councils can control them through village programs.”

“The Faifeaus also to start visiting each family in the village and establish that one-on-one personal relationship with each family and their children.”

Faumuina added that it was important for village leaders to start bonding with youth while they are growing up in the church and village through organised autalavou programs.

In an act of self-reflection Faumuina also called on parliamentary representatives to play their part in facilitating job creation for Samoa’s youth.

“And of course the Member of Parliament needs to find and create jobs for youth, through Government programs that are already in place, to make sure there is employment.”

The issue of Chinese businesses having a reputation of not banking income was also raised by Faumuina.

“I would also like to encourage all Chinese Companies to please bank their takings daily and avoid holding money in their homes and businesses. It is a risk and a very dangerous one that you take because you are opening yourself to being targeted by thieves.”