As Samoa hosts the 3rd China – Pacific Island Countries Economic Development and Cooperation Forum, a group of young Samoans are on stand by to interpret Chinese to Samoan and vice versa.

China’s Vice Premier Hu Chunhua and a delegation of more than 250 government and business representatives from China acended into Samoa to attend the forum hosted by Samoa.

The economic forum aims to explore trade opportunities between China and the Pacific including trade in services in the areas of e-commerce and tourism.

Part of the economic forum are one-on-one match making sessions between Samoan businesses and the visiting Chinese businesses, believed to be more than 200 of them.

The returning students have studied in China, mostly for an average period of 5 years where they first need to learn the language before continuing  their chosen undergraduate degrees at Chinese Universities.

While throughout much of mainland China people speak their own local flavor of Chinese for everyday communication, they’ve all been educated in Mandarin, which, in general terms, is the language of Beijing and the north.

Linguists believe that there are 297 living languages in China today, that are geographically defined, and found in mainland China, Taiwan, Hong Kong, and Tibet.

Samoa is proud to be able to supply a pool of interpreters who are more than capable to interpret between Samoan – Chinese – and English.

From L to R on the photo are: 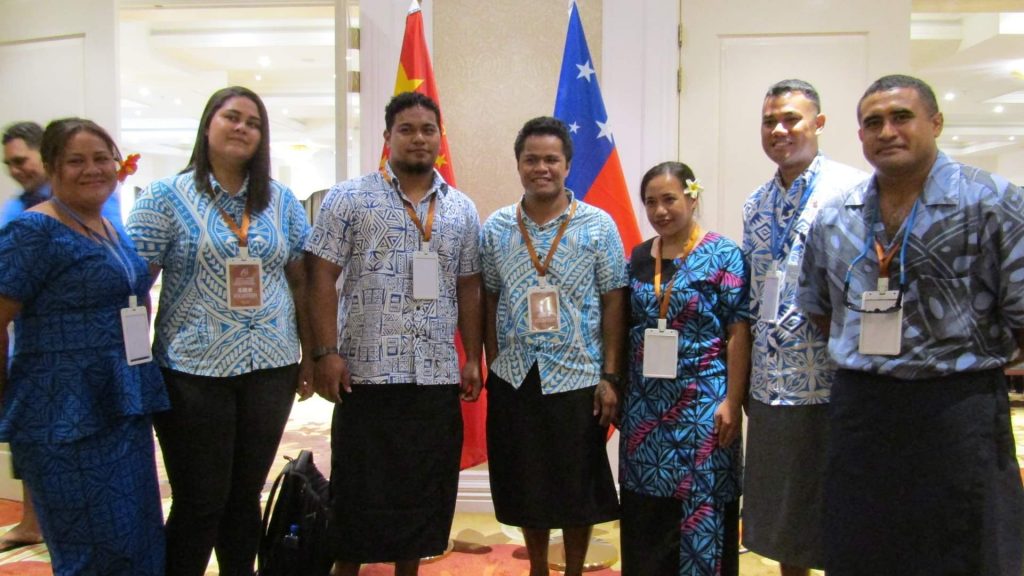 Faanofonofo Lautusi (former student), Jade Rasmussen who works in the private sector. Cecilio Tuala is now with Land Transport Authority (LTA). Samu Risati is with Customs and Folole Letelemaana Ioane works at Bluesky Samoa. Reupena Maugatai Matauiau is with the Ministry of Foreign Affairs and Trade (MFAT) and Apelu Viki works at the Fire and Emergency Services Authority (FESA).

Not captured in this photo are others who also worked as interpreters. Chinese Samoan Students Alumni President Aussie Simanu who works for MNRE, Mariaolelosalio Petelo of KVA, Frost Tuaau and Vailoa Lefata of MNRE, Cisco Tasi of PSC, Tulua Esera, Pat Ah Kuoi and Ruby Folau all of Samoa Airport Authority.

The Samoan interpreters worked throughout Saturday and Sunday eveving as well as the main program today.