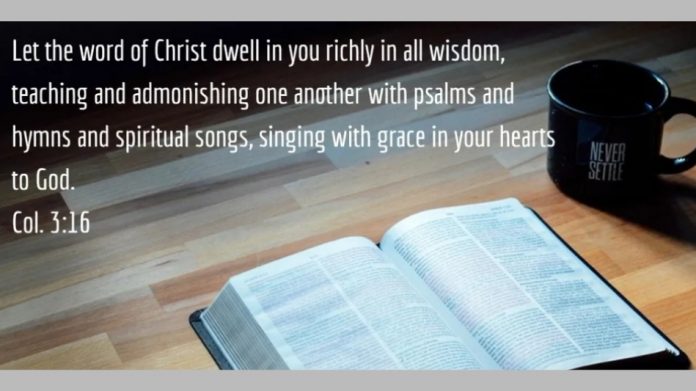 The Word for Today by Bob and Debby Gass.

‘Let the word of Christ dwell in you richly.’ Colossians 3:16 NKJV

Meditating in Scripture is one of the great keys to spiritual growth. In the first psalm, David writes, ‘In His law he meditates day and night.’ (Psalm 1:2 NKJV).

The word meditation is not one that a text-and-Twitter generation relates to very well. We imagine sober-faced monks wearing hairshirts and chanting on bended knees as the sun rises every morning. As a result, we want to run in the opposite direction.

We think meditation is a discipline that requires hours of uninterrupted time, and time is the one thing we don’t have in surplus. And the result? We live busy but spiritually barren lives.

Some of us think meditation is fine, but we believe there are other spiritual growth and character development areas we need to work on first.

So, what’s the problem? We don’t understand what it means to meditate, or the rich benefits it will give us.

A spoon of instant coffee is okay if you just want the basic taste of coffee. But if you want more—if you want to enjoy the flavours of the coffee in all their richness—you have to let it percolate.

So we could paraphrase the Scripture this way: ‘In His law, he percolates day and night.’

That is what Paul meant here: ‘Let the word of Christ dwell in you richly in all wisdom.’

Today, enjoy the aroma, taste the flavour, and experience the strength of God’s Word.

Remember Your Creator While Young

7 Light is sweet, and it pleases the eyes to see the sun.

8 However many years anyone may live, let them enjoy them all. But let them remember the days of darkness, for there will be many. Everything to come is meaningless.

9 You who are young, be happy while you are young, and let your heart give you joy in the days of your youth. Follow the ways of your heart and whatever your eyes see, but know that for all these things God will bring you into judgment.

10 So then, banish anxiety from your heart and cast off the troubles of your body, for youth and vigor are meaningless.

12 Remember your Creator in the days of your youth, before the days of trouble come and the years approach when you will say,  “I find no pleasure in them”—

9 Meanwhile, Saul was still breathing out murderous threats against the Lord’s disciples. He went to the high priest 2 and asked him for letters to the synagogues in Damascus, so that if he found any there who belonged to the Way, whether men or women, he might take them as prisoners to Jerusalem. 3 As he neared Damascus on his journey, suddenly a light from heaven flashed around him. 4 He fell to the ground and heard a voice say to him, “Saul, Saul, why do you persecute me?”

“I am Jesus, whom you are persecuting,” he replied. 6 “Now get up and go into the city, and you will be told what you must do.”

7 The men traveling with Saul stood there speechless; they heard the sound but did not see anyone. 8 Saul got up from the ground, but when he opened his eyes he could see nothing. So they led him by the hand into Damascus. 9 For three days he was blind, and did not eat or drink anything.

10 In Damascus there was a disciple named Ananias. The Lord called to him in a vision, “Ananias!”

11 The Lord told him, “Go to the house of Judas on Straight Street and ask for a man from Tarsus named Saul, for he is praying. 12 In a vision he has seen a man named Ananias come and place his hands on him to restore his sight.”

13 “Lord,” Ananias answered, “I have heard many reports about this man and all the harm he has done to your holy people in Jerusalem. 14 And he has come here with authority from the chief priests to arrest all who call on your name.”

15 But the Lord said to Ananias, “Go! This man is my chosen instrument to proclaim my name to the Gentiles and their kings and to the people of Israel. 16 I will show him how much he must suffer for my name.”

17 Then Ananias went to the house and entered it. Placing his hands on Saul, he said, “Brother Saul, the Lord—Jesus, who appeared to you on the road as you were coming here—has sent me so that you may see again and be filled with the Holy Spirit.” 18 Immediately, something like scales fell from Saul’s eyes, and he could see again. He got up and was baptized, 19 and after taking some food, he regained his strength.

Saul in Damascus and Jerusalem

Saul spent several days with the disciples in Damascus. 20 At once he began to preach in the synagogues that Jesus is the Son of God. 21 All those who heard him were astonished and asked, “Isn’t he the man who raised havoc in Jerusalem among those who call on this name? And hasn’t he come here to take them as prisoners to the chief priests?” 22 Yet Saul grew more and more powerful and baffled the Jews living in Damascus by proving that Jesus is the Messiah.

23 After many days had gone by, there was a conspiracy among the Jews to kill him, 24 but Saul learned of their plan. Day and night they kept close watch on the city gates in order to kill him. 25 But his followers took him by night and lowered him in a basket through an opening in the wall.