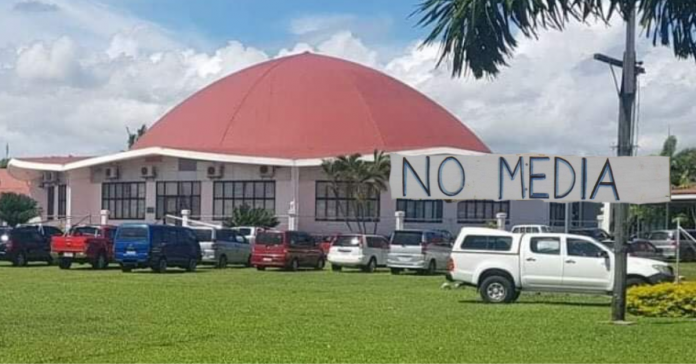 The Congregational Christian Church of Samoa (CCCS) is holding its general conference this week, and for the first time in the history of the Church’s annual conference, strict restrictions have been imposed on the local media.

First established as the London Missionary Society in 1830 the CCCS or EFKS is the denomination with the most members in Samoa. The annual conference is supported every year by over 70,000 members representing 35% of Samoa’s population. The media’s role in disseminating information to the public has always been an open and transparent relationship.

A student (a’oa’o) guarding the gate said the decision was an order from the General Secretary of the Church Reverand Vavatau Taufao, to not allow any media representatives to enter the Malua Theological College grounds, without permission.

“Please direct all requests to the main office, the answer will come from there,” he said.

When asked about taking photos, the theological student also said the media were prohibited from taking of any photographs, including the sign that states, NO MEDIA.

“That can only come from the General Secretary,” he said.

While speaking to the first student, another a’oa’o called out to the Samoa Global News photographer, “You are not allowed to do that!”, as she took a photograph of the sign.

This is a historical meeting for the CCCS or EFKS, as it is the first time an Annual General Meeting is taking place without member churches from around the globe, including New Zealand, Australia, United States of America, American Samoa, and even further from Hawaii and Alaska.

This year is a modified shortened version of the two-week long conference. It is expected to wrap up on Friday, after one week of meetings, with overseas members participating through zoom.

It is expected that the annual election and endorsement of the Church Chair and Vice Chair would take place this week. The current Chair is Susuga Tunumoso Iosia from the EFKS representing the matagaluega of Falealili/Siumu/Safata, while the Vice Chair is Reverend Elder Iosefa Uilelea from the Matagaluega of Lepa/Lotofaga.