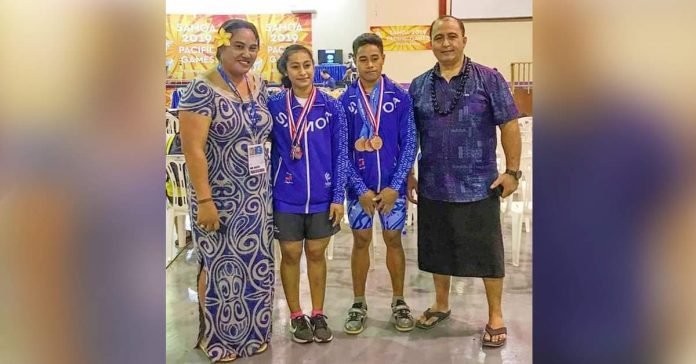 10 July 2019, Pacific Games Apia Samoa.  Sekolasitika Isaia of Lepea, Se’ese’e and Safune won medals earlier today in the Junior Oceania and Junior Commonwealth competitions that are running alongside the XVI Pacific Games in Apia this week. 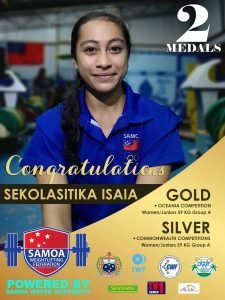 The man behind Samoa’s weightlifting success Coach and President Tuaopepe Jerry Wallwork said that Ms Isaia only joined weightlifting in 2017.

“She’s quiet but a very strong lifter and for someone who had just joined the weightlifting family she has done exceptionally well at a very young age too.”

In the Men’s 61kg A, John Tafi of Samoa won 13 medals all together for the Oceania and Commonwealth Championships!

He scooped up 2 gold, 2 silvers and a whopping 9 bronze medals in the clean and jerk, snatch and overall lift categories.

Tuaopepe says John Tafi is also one of the new lifters for Samoa but has performed exceptionally well in competitions.

Samoa’s national weightlifting team is competing against more than 400 athletes from the Oceania and Commonwealth regions in the Olympic Qualifiers held in Samoa as a “4-in-1 Weightlifting Competition” in conjunction with the Pacific Games.