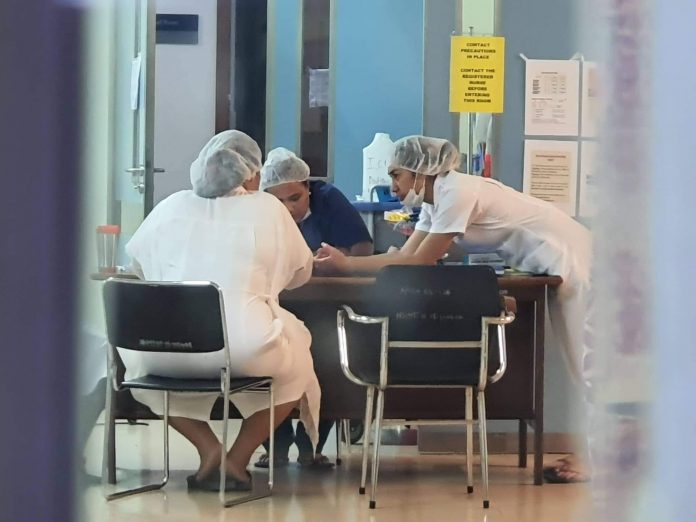 The death toll of suspected measles-related deaths is around 14 according to public health practitioners but this could soon rise as babies fight for thier lives at the Tupua Tamasese Meaole National Hospital Intensive Care Unit.

Outside the Intensive Care Unit in the early hours of this morning, family members of the five children being treated in ICU made beds on the floor, as is the common practice for Samoans when loved ones are in hospital.

One grandmother was on kausimai duties inside the ICU with her 1-year-old grandson hooked up to a ventilator – while her daughter, son-in-law and their 3-year-old get some rest on the floor outside.

When Samoa Global News visited ICU in early hours of this morning there were three young children in ICU hooked up to ventilators in critical condition. As of 11am this morning the babies were still fighting.

“They are hanging in there as of this morning. They are fighting and no predicting if they will make it. Many have survived though.”

At 3pm this afternoon Samoa Global News was happy to receive this report: “ICU babies are doing fine at present. 3 on ventilators. Good news.”

Our source says it is presenting late and going to fofo Samoa that needs to be stopped.

“It’s the ones arriving late that is the problem. The advise is for parents to bring the sick children to ED early. Not late”.

“How would one know how sick the child is? Not eating. Irritable and not happy. Diarrhea”.

“A 7 month old is not able to say they are sick. It’s when they are off feeding and not their usual self”.

Another senior medical practitioner in Samoa says there are a lot of children needing beds and the paediatric ward now has a situation of shared beds for children from the same family.

“The ward’s isolation ward set-up is full. So some are being treated in the ED”. (Emergency Department)

He says some children at the paediatric ward were immunized at the hospital last week.

“They probably got it from coming to be immunized here. Which is why the health services have to go out there”.

“This epidemic is now out of control. Only a mass vaccination will help. There are 75,000 kids needing it”.

Two sisters with a 58 year old brother in ICU with a heart condition said they had been transferred to ICU yesterday afternoon when the death of a child to the measles freed up a bed.

“We were supposed to come to ICU earlier but there were no beds”.

“When a young child died of the measles today, then a bed became available”.

Australia and New Zealand have already responded with vaccines, equipment and medical staff. Another medical team from New Zealand was despatched earlier this week and Australia are setting up a mobile ICU that should be ready by the weekend.