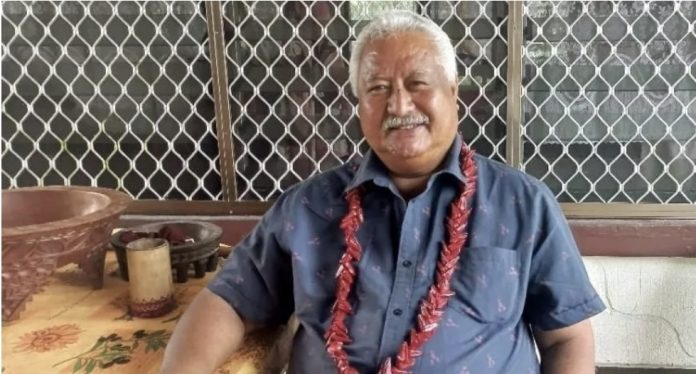 5 February 2022, Apia Samoa. Member of Parliament for Sagaga 2, Maulolo Tavita Amosa, is elated of the news that an election petition filed against him by fellow Afega candidate Fata Ryan Schuster, will be withdrawn next week.

Maulolo says communication with Fata Ryan has been through their respective lawyers, however, he can confirm the intention is to meet with his petitioner and finalise arrangements and have filed petitions withdrawn.

“I was contacted by my lawyer, and the plan is to meet on Monday, and to file applications to withdraw both petitions,” said Maulolo.

Fata Ryan Schuster polled in third place with enough votes to attain the minimum “half-the-votes” required to file an election petition against the winner.  As has become the ‘norm’ or common practice of Samoa’s post-election process, a counter petition by Maulolo against Fata Ryan was then also filed.

Sagaga 2 is an electorate in Samoa consisting of just three villages – Malie, Afega and Tuanai.  Maulolo’s win marks the first time in decades that a candidate from Afega had secured the Sagaga 2 district seat, previously dominated by the village of Malie.  Maulolo was able to secure the seat despite there being three quality candidates from Afega – himself, Fata Ryan and Fata Meafou.

Speaking to Samoa Global News today, Maulolo says the decision to have these post-election petitions withdrawn will allow the constituency to move forward peaceably and focus on development projects, which he hopes his fellow candidates will join to help implement, and ensure the benefits are distributed equally to all families of Sagaga 2.

During Maulolo’s maiden speech in Parliament, he highlighted key development areas needed for Sagaga 2 including vocational training for non-academically inclined youth, securing markets for informal business owners in the agricultural and fisheries sector including the establishment of a fish market for the constituency, and infrastructure such as an access road to farms for Afega. Maulolo had also said that according to his research, Samoa had 8.3 to 1000 healthcare workers to population, or a ratio of 1:120.