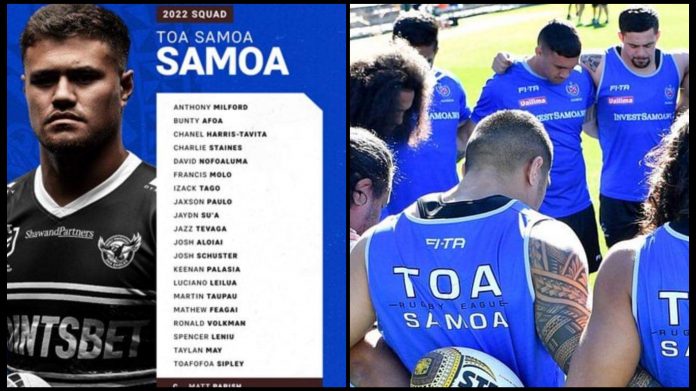 Source: NRL.com  Toa Samoa Coach Matt Parish has picked an exciting 20-man squad with 11 debutants to take on the Cook Islands on the 25th of June.

Parish has named a mix of young talent and experienced NRL stars in Toa Samoa’s first squad in two years.

Parish has not named any of the eligibile players involved in the State of Origin opener last week. According to Parish, he did not want to exert any unnecessary pressure on the Samoan players selected as they prepared for the second Origin test.

“We are proud of all players with Samoan heritage who are playing in all teams in the upcoming Representative Round,” said Parish.

“Out of respect to the players involved in State of Origin, we did not consider any player chosen in the NSW or Queensland squads for Game I.

“However, if they were to become available for the Pacific Test we would consider late changes to include them.”

Penrith Panthers stars and NRL 2021 Premiership winners Izack Tago, Taylan May, Charlie Staines and Spencer Leniu are among the debutants set to represent Samoa for the first time.

The 11 debutants will be joined by a line-up of experienced players.

2019 was the last time Toa Samoa played an international test due to the covid outbreak.

Parish said it’s exciting for Samoa to be back again in the Pacific Test.

The Game will be played on the 25th of June in Campletown Sports Stadium Home of NRL team West Tigers in Western Sydney.

Samoa also announced a new sponsorship with PacifiCast ahead of the Pacific Test.

The Game will be played on the 25th of June in Campletown Sports Stadium Home of NRL team West Tigers in Western Sydney.