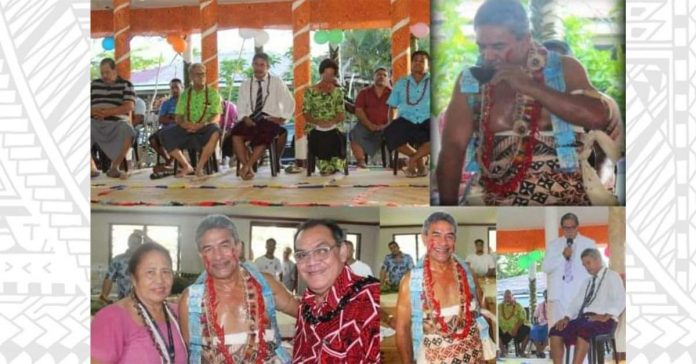 The newly enacted LTC Act 2020 places a restriction on the matai sa’o, or the sole head of an extended Samoan family, to be domiciled in Samoa and be present in the family and village to carry out duties expected of a matai sa’o. S13(c) LTC Act 2020.

A paramount chief from the village of Apia, Tuiletufuga Fritz Tuiavii-Savaiinaea, told Samoa Global News that he agrees with and supports the changes “one hundred percent” because the service is one that requires physical presence to lead not only in the family, but also in the church and village.

“I totally agree with the changes because a matai sa’o is someone who lives here and serves his family, the church and the village, not someone who resides overseas,” he said.

Tuiletufuga said the families should be able to seek help from and ask for counsel of, their chiefly leader, who therefore “needs to be physically here”.

Tuiletufuga believes it is about an ongoing relationship and contact with family, and just as a matai sa’o serves his family, so too do suli or extended family members reciprocate the act of service by working together with their matai sa’o to unite the family and maintain family legacies and traditions.

Tuiletufuga says that is why it is so very important for them to be physically in Samoa, and not be a family member who stays abroad and gives out orders over the phone, even if they do send money and assistance.

S13 To maintain the integrity of the institution of the Samoan matai sa’o, the following apply..

(c) The Matai Sa’o given the responsibility of serving the extended family should be domiciled in Samoa and be present in the family and village to carry out duties expected of a Matai Sa’o.

The opinion of Tuiletufuga is echoed by Faiilagi Asiasi, a business woman who serves her family as a ‘suli’ who says the Law is just documenting something that her family has always followed.

“The dignity and honor of a matai sa’o in any family is upheld if it is bestowed upon a descendant who is residing here in Samoa,” she said.

Faiilagi said she understands that a lot of suli or descendants who live overseas are eligible to be bestowed the matai sa’o, but the true faa Samoa she says, is that the descendant who is living in Samoa, and serving the family by their physical presence, should be the one matai sa’o titles are bestowed upon.

The issue has become contentious with many SGN followers sharing the view that any and all decisions pertaining to the bestowal of chiefly titles, should remain solely with suli or descendants of a matai title; and not something that should be legislated by Laws.

Many high chiefly titles in Samoa have opened up (tatala le suafa) to be bestowed upon more than one family member. It is not uncommon to have a situation where there is one or even several who live within and deal directly with the village, others holding the same title who live in Samoa and support those in the village, and still others who live overseas and support the family from there.

The changes are not retrospective and do not apply to existing title holders.