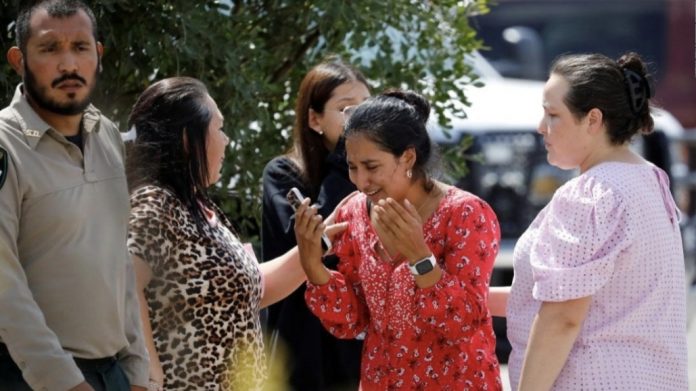 Wednesday 25 May 2022 (Tuesday 24th May in the US).  An 18-year-old gunman walked into an elementary school in Uvalde Texas and fatally shot 19 children and two adults at a Texas elementary school before he was killed by law enforcement officers, officials said.

Governor Greg Abbott said at a news conference that the 18-year-old man abandoned his car and entered the school with a handgun and a rifle.

The Governor said one of the two adults killed was a fourth-grade teacher. State officials later confirmed that the second adult killed was also a teacher.

After confusing early accounts of the death toll, a Texas DPS spokesperson later announced that 19 school children and two adults were killed, not counting the shooter.

The shooter — identified by Texas officials as Salvador Ramos, of Uvalde also shot his grandmother before crashing a vehicle near the school, Texas Department of Public Safety Sgt. Erick Estrada said. “She is in critical condition”, he said.

“The suspect crashed his car near a ditch nearby the school. That’s where he exited his vehicle with what I believe was a rifle and that’s when he attempted to enter the school where he was engaged by law enforcement,” Estrada said.

“The gunman had body armor, the rifle and a backpack.. the shooter made it into several classrooms,” Estrada added.

The gunman is believed to have acted alone, Uvalde Consolidated Independent School District Police Chief Pete Arredondo said at a news conference on Tuesday afternoon. Arredondo said that several adults and students had been injured.

Robb Elementary School has an enrollment of just under 600 students and Arredondo said it serves students in the second, third and fourth grade. He did not say what grades the children that were shot are in.

Two children who were killed had died by the time they arrived at Uvalde Memorial Hospital, Adam Apolinar, the hospital’s chief operating officer, said earlier in the afternoon. Their ages were not immediately released.

The latest shooting is the deadliest school shooting in Texas history. Four years ago a gunman fatally shot 10 people at Santa Fe High School in the Houston area.

Biden ordered flags to be flown at half-staff at the White House and other government buildings following news of the tragedy. Biden has called on the US to turn its collective pain into political action following the deadliest elementary school shooting since Sandy Hook in 2012

The shooting occurred after new FBI statistics released Monday showed active shooter incidents in 2021 surged by more than 50 percent from 2020 and nearly 97 percent from 2017.