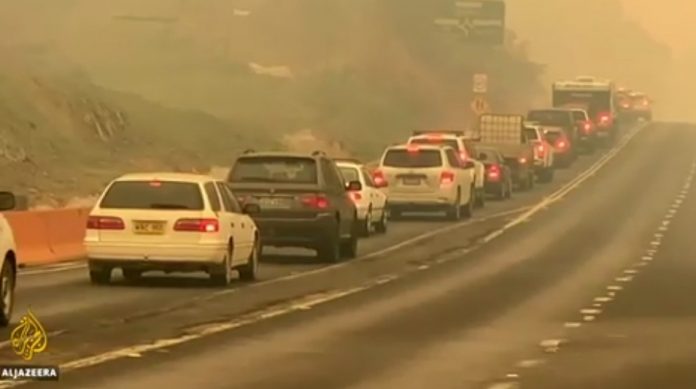 By Kate Walton, Aljazeera. Canberra, Australia – Bushfires continue to ravage the south-east of Australia, with unprecedented heat and drought leading to over 200 fire fronts burning across multiple states.

The catastrophic conditions saw the country’s largest peacetime evacuation take place on Friday as towns prepared for the worst.

With strong winds and temperatures of over 45 degrees Celsius across much of the region, more than 100,000 residents left evacuation zones in the three worst-affected states of New South Wales (NSW), Victoria and South Australia.

Both locals and tourists were strongly encouraged to leave by authorities, or face being stranded once access and supply routes were cut off by fire.

Twelve emergency warnings were issued in NSW and 13 in Victoria, and fire-generated thunderstorms were generated in multiple locations. 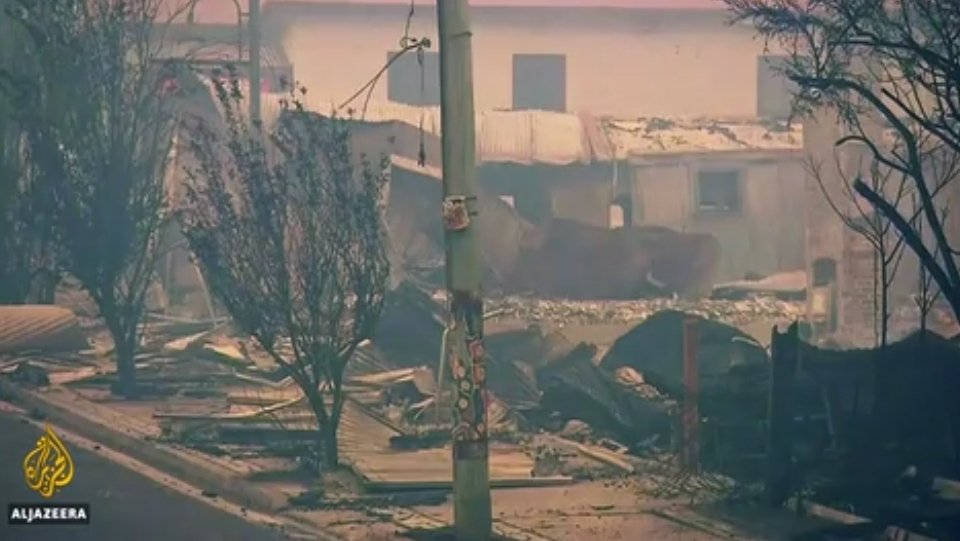 The fires have already burned more than 6 million hectares of land, equivalent to an area twice the size of Belgium or most of Ireland.

At least 23 people have died, dozens more are missing and at least 1,300 homes have been destroyed. Half a billion animals, including native wildlife and farm animals, are estimated to have died.

Towns on the NSW south coast were taken by surprise on New Year’s Eve when a huge fire suddenly moved eastwards overnight.

On Saturday, roads were quiet and town centres deserted, but yellow-lidded recycling bins were placed outside homes to indicate where residents were staying to fight embers and spot fires.

More than 20 new fires had broken out on the NSW south coast between Batemans Bay and Nowra by mid-afternoon, with flames reaching as high as 40 metres outside Nowra.

Thousands of locals took shelter in evacuation centres and on the beach as “too late to leave” warnings were issued for multiple areas. Telecommunications and electricity remain down in many of the small towns along the coast. 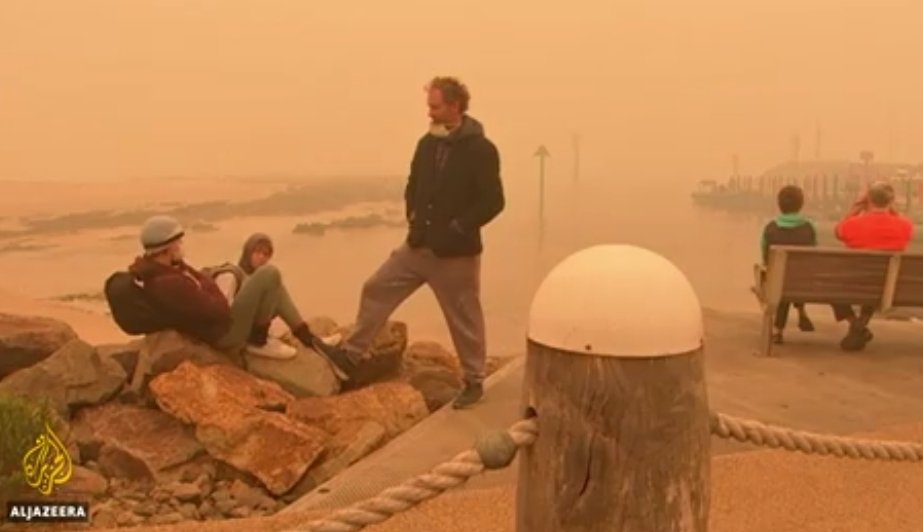 “Our house is on the cliff at Mossy Point,” Julie Stuart told Al Jazeera. “If we had stayed, the only escape route would have been over the cliff.”

“With the size of the flames and their ferociousness, there is no way we could defend our area if needed,” she said. Her husband had initially wanted to stay but reconsidered after authorities warned them Mossy Point was likely “going to go”.

In Victoria, over 1,100 people and 115 pets were evacuated by two Australian Navy ships from the Gippsland town of Mallacoota.

They arrived in Hastings near Melbourne after sailing for 16 hours. More than 4,000 people have been isolated in Mallacoota since a massive firefront swept through on Monday night, when they were forced to shelter from the flames on the town’s wharf and beach.

“It’s a mass relocation of a nature which is completely unprecedented in Gippsland’s history,” said the local member of parliament, Darren Chester.

In Canberra, the nation’s capital, the temperature hit 43.6 degrees Celsius in the city centre on Saturday, breaking previous records from 1968 and 1969.

In one of the few positives to be found, air quality improved after two days of the world’s worst air pollution according to AirVisual.

Smoke from nearby bushfires had been so bad that MRI machines at the Canberra Hospital were rendered unusable and Australia Post stopped deliveries.

Hardware and pharmaceutical shops sold out of protective face masks, while supermarkets on the capital’s outskirts were emptied of food and water as locals prepared for the worst, fearing a repeat of the devastating 2003 bushfires.

In the nearby Snowy Mountains, also designated an evacuation region, ski resorts turned on their snow machines to protect infrastructure.

Fire crews were pulled out mid-afternoon from multiple areas in the Snowy Mountains as wind gusts of up to 60km/h began pushing fires rapidly forward and shooting embers far ahead of fronts. Electricity was affected in the region when the fire took out two electricity substations just before 6pm.

Troops to be deployed

Meanwhile, in the state of South Australia, a bushfire on Kangaroo Island had burned across at least 100,000 hectares of the island.

Two people were found dead in their burnt-out car, and the territories of large numbers of native animals, including endangered species such as dunnarts, bandicoots and Australia’s only chlamydia-free koala population, have been ravaged.

Prime Minister Scott Morrison has been criticised for a slow and inadequate response to the bushfires. Morrison received a cold reception from residents of destroyed NSW town Cobargo on Friday, with locals and Rural Fire Service (RFS) firefighters refusing to shake his hand and accusing him of ignoring pleas for increased assistance prior to this fire season.

On Saturday afternoon, the federal government announced that 3,000 defence force reservists would be deployed to assist evacuation and recovery efforts. This is the first time in Australian history that a compulsory call-out has been issued for reservists.

For many Australians, both federal and state government responses were unsatisfactory. Writer Erin Riley established an online “find a bed” service for evacuees in Victoria and NSW at the end of last week when she learned just how many people needed temporary accommodation.

“Many people who have evacuated have done so with pets, or would rather stay in their community than go further away,” Riley said. “We’ve had an overwhelming response, with almost 3000 Australians so far volunteering to open their homes.”

On Saturday evening, NSW RFS commissioner Shane Fitzsimmons told the media that a southerly wind change coming through could complicate the situation overnight.

“We are getting reports of significant damage and destruction … in a number of these different fireground locations, given the speed and ferocity at which these fires are burning,” Fitzsimmons said. “And I think we do, unfortunately, need to be ready [for bad news], probably tomorrow morning.”