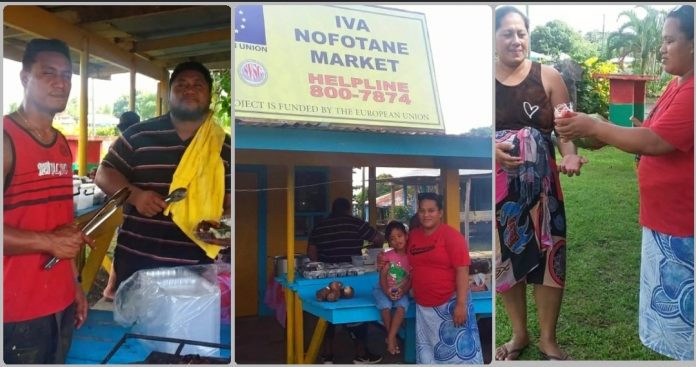 The newly set up Nofotane Market at the sub-village of Vaiafai Iva in Savaii, is the latest development of a European Union (EU) funded project by Samoa Victim Support Group, to support the ‘Sustainable Income Generation & Self Employment of Nofotane Women’ in Samoa.

Vaiafai Iva is about 6-8 minutes drive from the township of Savaii at Salelologa. It is home to five SVSG village representatives and 15 nofotane women empowered through the Nofotane Economic Empowerment Program.

“Having worked with the unemployed nofotane women survivors of violence of Vaiafai Iva since 2016, the transformation in the lives of these women todate is commendable,” states an SVSG press statement.

One of them is Fetu Michael from Fatausi Savaii, who is now a nofotane woman of Vaiafai Iva. A mother of 6 who was busy with her stall at the Iva Nofotane Market when SVSG visited during the week.

Fetu did not learn a livelihood skill during the nofotane economic empowerment program in 2016. But she saw how the women who participated were earning income from the skills they learnt and she was inspired to become an earner herself.

In 2020, Fetu requested to join the SHINE self-esteem program, which is part of the current Nofotane project.

At that training Fetu said she was reminded about her purpose, value and worth. From then onwards, she never looked back.

“Since joining the Nofotane Program, I started seeing the monetary value of any produce from our family plantation such as pawpaw, coconut, yam, taro and coconut. I even viewed my normal task of preparing food for my family as an added value to earning an income.”

And that was exactly what Fetu was selling at the Iva Nofotane Market; fresh produce from the plantation plus a BBQ operated by relatives. Fetu’s ability to support her family as a bread winner proves valuable, especially given the financial hardships faced by many families due to the economic impact of the COVID-19.

Fetu’s husband, who works as a Bus Driver shared on the posivite changes in their family since Fetu was empowered through the Nofotane Program.

“Fetu’s market earnings has been a big help to us,” he said.

“We can afford to pay for our children’s education and a treat of ice cream every now and then. We have also opened up a savings account, and we can still contribute financially towards the village and church obligations.”

Pressures from lack of finance IS NOT a cause but it has been identified as a trigger of violence against women and children.

The eased financial pressures from income earning opportunities does help to mitigate family violence through removing pressure on families.

Poverty is a risk factor associated with gender-based violence, and SVSG’s ability to support the sustainable income generation and self employment of nofotane women, is an important intervention towards this end.

SVSG President Siliniu Lina Chang says, “It has been five years now since SVSG had taken up the economic empowerment of women in the fight to end violence against women. And it is stories of change as shared by Fetu Michael and her husband that speaks volumes of the impact of such an approach in achieving gender equality in Samoa”.

“Thank you to the European Union through the Civil Society Support Program for funding the continuation of the Nofotane Program since 2020.”