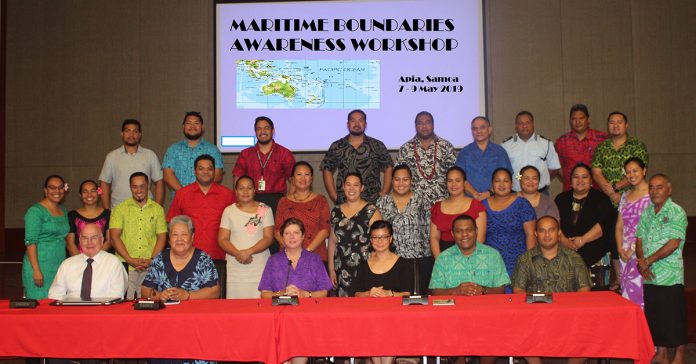 The workshop was opened with introductory remarks by, Ms Peseta Noumea Simi, Chief Executive Officer of the Ministry of Foreign Affairs and Trade and Co-Chair of the National Maritime Boundaries Committee, and H.E. Ms Sara Moriarty, the Australian High Commissioner to Samoa.

Presentations were given by the visiting partners as well as government ministries, such as the Ministry of Foreign Affairs and Trade, Office of the Attorney General, Ministry of Natural Resources and Environment, Ministry of Agriculture and Fisheries, Ministry of Works, Transport and Infrastructure and the Ministry of Police.

The aim of the workshop is aligned with the Leaders’ statement from the Pacific Islands Forum Leaders’ meeting in September 2018whereby they acknowledged “the urgency and importance of securing the region’s maritime boundaries as a key issue for the development and security of our region, and thereby for the security and well-being of the Blue Pacific Continent.” The workshop is funded by the Pacific European Union Marine Partnership (PEUMP). Technical and legal advisers are provided under the Pacific Maritime Boundaries Project, funded by the Government of Australia.