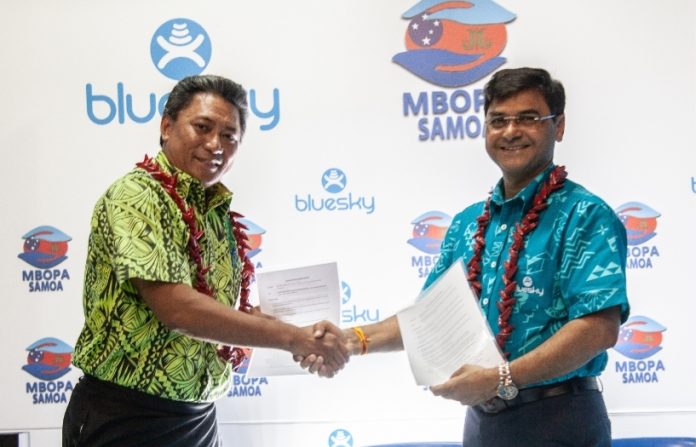 Bluesky Samoa and Marist Brothers Old Pupils Association (“MBOPA”) have signed an agreement to signify their willingness to work together for their mutual benefit and social cause.

The proceeds from the dinner will support Marist Brothers’ schools in Samoa, namely St Joseph’s College and Marist Brothers Primary School. MBOPA’s aim is to again make these institutions schools of excellence for the children of Samoa. As a school in Samoa, Marist Brothers has produced leaders contributing to all areas of Samoa’s development from government, to sport, to business and the community at large.

“Our new partnership with the Marist Brothers Old Pupils Association provides a platform for us to help raise funds for the Marist Schools. The children are our future and we are passionate about investing into their learning by means of affordable internet packages and affordable Wifi for students to help them thrive in their education through online studies. There is a lot of information available on the Internet and we want the Marist Schools to have easy and reliable access to internet and be at par with students of other developed countries.” says Satish Sharma, Bluesky CEO.

Bluesky’s assistance is not just for the corporate dinner, but for future events of MBOPA such as its annual sports and family day with SMOGA, St Joseph’s College’s 70th Anniversary 2020, Marist Music Concert 2020, etc. In addition, Bluesky is looking at supporting St Joseph’s College’s attempts to establish e-learning.

Tuatagaloa Ming Leung Wai, President of the Marist Brothers Old Pupils Association says he sees this partnership as beneficial to the schools as well as MBOPA’s affiliates here in Samoa and abroad, who contribute to the development of the catholic church school.

“MBOPA has one of the biggest networks in Samoa and abroad that we tap into for support to the schools. Marist education is holistic in its approach as it teaches not just the mind, but also the heart and spirit based on Christian principles to produce good citizens to serve our country,” said Tuatagaloa.

“MBOPA’s values of family spirit, loyalty, giving back, passion and hard work are consistent with those of Bluesky’s. It is therefore only natural for Marist to align itself with Bluesky,” added the President.

The signing of the mutual cooperation agreement between MBOPA and Bluesky Samoa at MBOPA Taula Lounge, Alafua was witnessed by many prominent members of MBOPA. Amongst them  was Hon. Salausa Dr John Ah Ching, Associate Minister of Health who remarked, “I believe Bluesky has made the right choice in picking MBOPA as a partner. With Bluesky pushing to promote education, MBOPA is the appropriate avenue as it will ensure that all assistance will directly reach and benefit the students of Marist schools.”

The Bluesky Marist Corporate Dinner will take place on Friday 15th November 2019 at Skycity Convention Centre, Auckland, New Zealand. The guest speaker is Hon. Tuilaepa Lupesoliai Dr Sailele Malielegaoi, Prime Minister of Samoa. The MC will be Tofiga Fepuleai with entertainment provided by OZKI Band, Tatau Samoa Dance Group and Drums of the Pacific. There will also be a special appearance by Avia Brothers who will be flying from Australia specifically for the dinner.

To purchase a corporate table or donate to the development of Marist schools in Samoa, please contact maristeventsamoa@gmail.com.