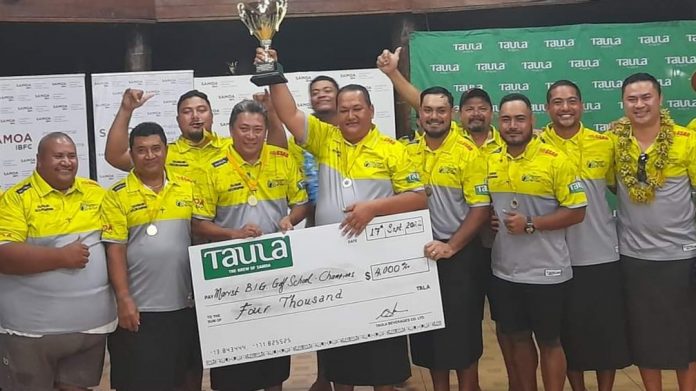 A press statement by the organisers announced that 3 overseas and 10 local golf clubs battled it out at the second instalment of this tournament, now called Taula Samoa IBFC International Golf Clubs Championship.

Last year, Le Vaiotausala Golf School from Fagalii emerged as the victor to claim the title of the Top Golf Club in Samoa, with Mike’s School in second place and Marist B.I.G Golf Club coming in 3rd.

“What an awesome 2 days of golf and fellowship. Vi’ia le Ali’i” the Marist B.I.G. organisers have posted on social media.

The second runners up went to one of the most established clubs at Tuanaimato Golf Course, the Tsunami club.

Tsunami was one spot ahead of Fagalii Golf Course’s well established club – the Mango Tree Golf School, who were also awarded the Best Uniform of the tournament.

In fifth place was the popular Brothers and Sisters club, originated by the Leavai family of siblings, all golfers.

Taula Beverages was the event naming sponsors, together with Samoa’s International Business Finance Centre. Samoa Stationery and Books were also sponsors of the annual tournament which promises to expand even further next year.