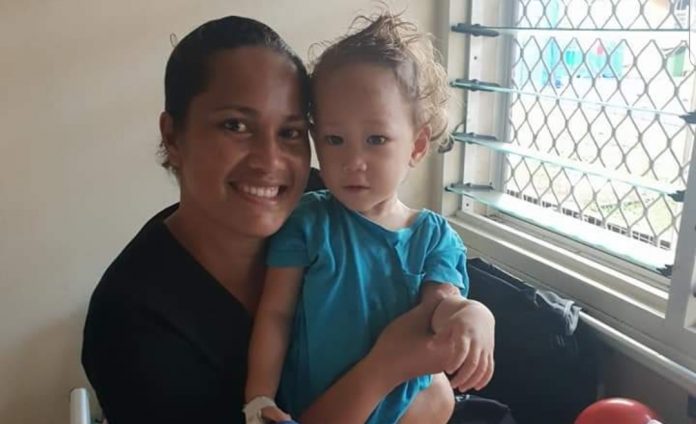 Amidst the heartache of families who have lost children and loved ones to the measles epidemic is also the good news of hope and recovery for many babies at the paediatric ward discharged over the past two days.

Bernard Leiataua was discharged late last night, having fully recovered from the measles after spending several days at the TTM national hospital.

Israel Ta’atiti has also recovered well and is due to be discharged from TTM Motootua hospital today.

Clara Ah Kuoi who started a coordinated campaign last week to help with supplies needed by the paediatric ward told Samoa Global News that many children are recovering well from the extended paediatric ward set up in the old hospital building.

“Those beds all had patients on Monday night and last night they were all empty. Mothers were able to take their babies home. Thank you Jesus.”

Clara says that they saw so much fear in the parents when they first went in and the bonus for her has been the opportunity to pray over the mothers and their babies.

“The first day we went in there I met another girl named Peace Aiono and we just cried and cried.”

“We were so blessed to help give but also got to pray for them.. the real reason I wanted to go into the hospital;

“I declare that I will arise from fear and embrace the courage of the Lord,” says Clara.

Mrs Ah Kuoi said three babies in the special Isolation ICU tent also recovered in the past 48 hours and moved back to the paediatric ward.

“There were 6 babies in there, and last night only 3; we were told they are recovering well.”

The mobile Intensive Care Unit has been set up by the Australian Government outside the old national hospital buildings at Motootua.

Mrs Ah Kuoi had received a list of needs from a friend who works at the hospital. She then  posted a pubiic request for supplies of diapers, food, flannels and blankets last Thursday which has seen a multitude of donations come through from good Samaritans in Samoa and American Samoa.

Owners of the Orator Hotel Leiataualesa Jerry and Fiaailetoa Charlotte Brunt donated boxes of supplies distrubuted by Clara and her team of supporters last Saturday.

“This was all kindly given by Jerry and Charlotte Brunt of Orator hotel from diapers to juice, baby wipes, tea bags..we got to give all these out to the children at Motootua hospital.”

With a monetary donation from Loretta Lees of American Samoa, Clara and her team purchased a Hot Water Boiler for sterilising baby bottles at the paediatric ward.

“The head of the paediatric ward asked me on Friday night that they needed a hot water boiler. I laughed and said ok I’ll ask God;

“And then the money came through. It was enough to buy one for them, as well as a whole lot of diapers,” she says with a huge smile.

Clara says she is posting daily on social media to thank the many people who have sent supplies needed by the children and families at the Motootua paediatric ward.

From the past week, she has observed the dedication of nurses and doctors working around the clock to keep up with the influx of patients, and they’ve also seen a team of Australian doctors and nurses helping with the children in isolation.

“Please keep our doctors, nurses and hospital staff in your prayers. A big thank you also to the Australian doctors and nurses who flew over to help at Motootua at this time,” added Clara.