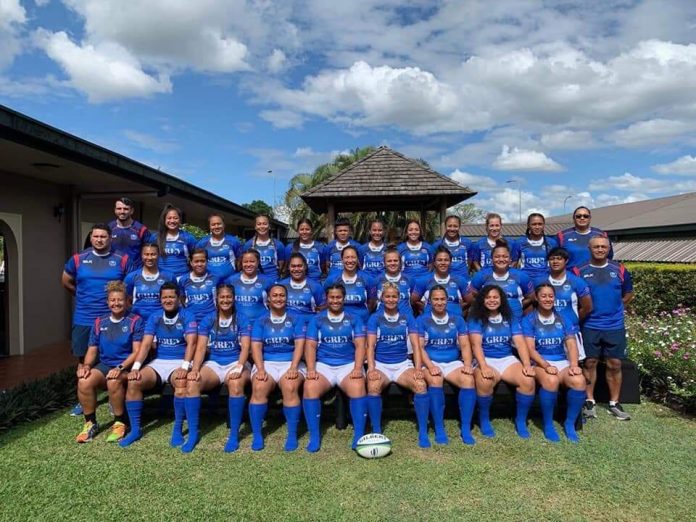 02 June 2019, Apia Samoa. The Manusina have won the inaugural Asia Pacific Championship after narrowly defeating Fiji at Lautoka Stadium by 15-12.

Despite enjoying territorial advantage the Samoans were made to work hard by the Fijians who provided some spirited defence throughout the match.

The two teams were locked at 5-5 at the halftime mark after a see-saw half where both sides barely gave each other an inch.  Debutant Linda Fiafia scored Manusina’s solidarity try crashing into the right corner.

As if it wasn’t tense enough at the Lautoka Stadium, the hosts managed to level the score sheet just before the halftime whistle.

Both teams enjoyed a fair share of posession in a nail biting second half. The pressure built and the clock became a major factor.

The pressure finally gave way and Billy Jean Ale found space to beat defenders through an attacking backline play deep within Manusina’s own half to unleash fullback Soteria Pulumu who raced from the halfway to dot down in the corner.

Manusina enjoyed more possession and territory and were once again looking likely to score as they built on good recycled ball.

Attacking down the left hand side again found the dangerous Pulumu who attracted a couple of defenders and offloaded to hardworking number 8 Nina Foaese who found the tryline unchallenged.

With the try uncoverted Manusina were still not out of the woods at 15-5 before the Fijians on their home soil.

The unpredictable Fijians struck back with a try of their own in the corner which was superbly converted to close the gap at 15-12.

To the relief of the Manusina the referee blew the final whistle to end Fijis attempt at a grandstand finish.

Leading the Manusina as Co-Captain was Masuisuimatamaalii (Sui) Tauaua-Pauaraisa who says she loves to serve Samoa through women’s rugby and gave all the glory back to God.

Pauaraisa says it was a massive challenge to undertake and gives credit to the support and ‘tapuaiga’ of the nation as she observes that this is the “first win in 5 years for any Samoa national team on Fijian soil”.

“I am stoked and super proud of my girls;

“A massive thank you to our coach Ramsey Tomokino and his amazing crew! We love you guys.”

“Happy 57th birthday our beautiful Samoa, we appreciate all the prayers, love and support from our loved ones and everyone around the globe.”

Manusina Co-Captain Marylin Live who plays for Kia Toa Club and Manuwatu was also instrumental in the team’s success. The strong scrummager and ball carrier debuted in November’s Oceania Championship and is known for her leadership both on and off the field.

Speaking to Samoa Global News from Fiji after the game, Coach Ramsey Tomokino said he was pleased with the team’s performance and proud of the way the Manusina had stepped up to the challenge despite the conditions.

“Today we won ugly, it wasnt our best game, but we will take it;
We are proud to come away with 2 wins only being together 7 days effectively giving us 5 trainings as a team;
“We are proud we did this for Samoa on our Independence Day. We spoke about what independence meant and it was not lost on the girls, and that in their own way they are having their own independence battle for the recognition of womens rugby for Samoa, said Tomokino.
“You forget to cover off little things with your game drivers like game management, our choices on the field were poor;
“We were trying to shift the ball when we hadn’t gained ascendency over them;
“We will regroup and start building a squad towards November. Soteria Pulumu is a world class player and her contribution to our campaign was huge;
“The players were very apprehensive about the lack of time together, and after the Hong Kong win we knew that we had a lot to work on before the Fiji match;
“We challenged the team that they could do this and devised game plans that were compact and brief, and specific to both Hong Kong and Fiji, said Coach Tomokino.
Not enough time together is not a new issue faced by Samoa’s Women rugby teams and Assistant forwards coach and former Manusina captain Cynthia Ta’ala shared with the team how Manusina landed in Spain, and with one training off the plane, played the next day and managed to gain the bonus point needed to qualify for Rugby World Cup.
Coach Ramsey added, “It was highlighting to the girls to see the possibilities of what we can achieve with limited time and resources”.
The Manusina had played Hong Kong three days ago on Tuesday, and Coach Tomokino says it needed focus and strategy to work smart within the time constraints they had to face.
“We played Hong Kong after 3 training sessions together, and then had a rest recovery morning before we got back into preparing a game plan for Fiji;
“We had to assess our injured players the very next day, and then start to pull it altogether on Thursday;
“We knew how we wanted to play Hong Kong but that approach would be very different to how we had to play Fiji,” said the Manusina 15s Head Coach.
Tomokino added that it was all about identifying and bringing on board Samoa’s best players, and keep building towards November’s World Cup Qualifiers.

The Inaugural Asia Pacific Championship was a tri series tournament between Samoa, Fiji and Hong Kong. Manusina had defeated Hong Kong 34-15 earlier in the week.