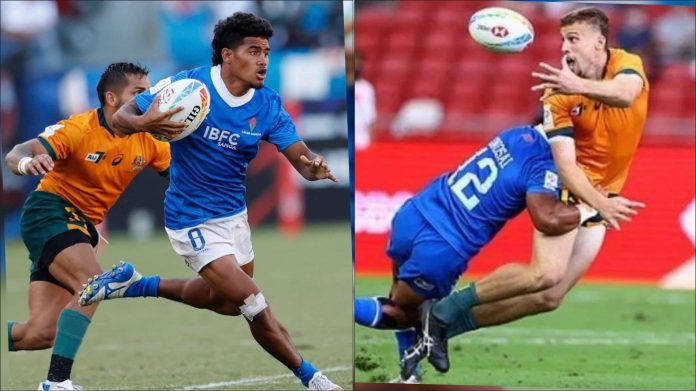 Samoa are so far unscathed in the pool of death after a nail biting 22-17 win over defending champions, Australia.

Both teams had a decent crack at each other in the early stages of the game but neither team were able to put up any points.

The top class defence by both teams was a treat to watch for any rugby fan, but it was the Aussies who were able to draw first blood through a Drew Hutchinson try.

Muliagatele Brian Lima’s men hit back instantly when Motu Opetai split the Australian defence and found a flying Uaina Sione who proved too quick to be caught by the Aussies.

Australia went on to score one just before halftime, and then hit back seconds after halftime with another try.

Samoa suddenly found themselves at the bottom of a steep hill, trailing 17-5 with six minutes to go.

Keeping calm and focused, Manu Samoa regrouped and turned on the razzle dazzle in Hong Kong.

It started with Owen Niue backing himself to show that he is one of the fastest men in 7’s rugby. Niue showed a clean pair of heels as he ran around the Australian defense to score under the posts.

A late tackle by Australia as Niue placed the ball for his try resulted in a yellow card for the Aussies.

Just as he did throughout last season, Va’afauese Maliko confused the Australian defense to scored Samoa’s third try to tie up the match at 17-17.

Maliko won a turnover for Samoa and the men in blue shifted the ball one way and then went back to Maliko who strode away from the Australians and towards the tryline to win the match for Samoa, 22-17.