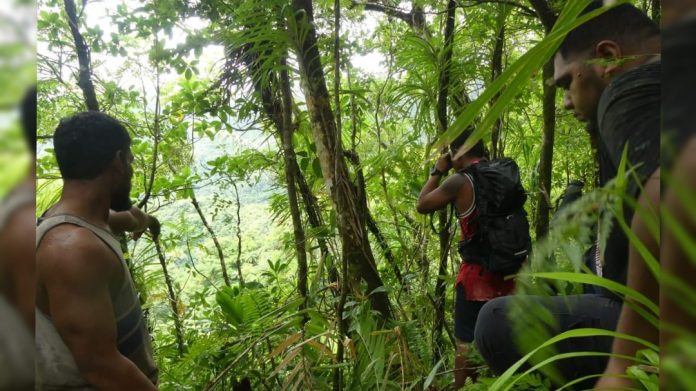 There were two sightings of Samoa’s national bird, the Manumea, during a field survey at Uafato conducted by the Samoa Conservation Society (SCS) and the Ministry of Natural Resources and Environment (MNRE) this past week.

“The breeding season for the Manumea is from April to November according to historical records,” says SCS’s Threatened Species Conservation Officer for the Manumea, Ms Moeumu Uili, “but even with this exciting news of Manumea once again located in Uafato, the species continues to decline in numbers..”

The Manumea is a resident of the rainforests of Uafato and with support from the village men, a search team of the Samoa Conversation Society (SCS) and MNRE field staff recorded two sightings during a camp between the 11th – 13th May.

Moeumu says Samoa’s national bird, currently listed as a critically endangered species in the ICUN Red List (International Union for Conservation of Nature), is still in the lowland forests of Uafato to Tiavea.

“Manumea seems to survive in this unique and rugged landscape where there are sheltered patches of good quality rain forest between the valleys,” says Ms Uili.

Moeumu says they had two search teams, the first with five people explored the north eastern side of the village and the second team of four people navigated through the rough terrain southwards.

“Interestingly, records from both teams identified the same hours of the day when the Manumea was calling – between 6am and around 11am,” said Moeumu.

“We were both out leading the two teams,” Moeumu tells SGN. “Faleafaga’s team saw and heard the Manumea on one side to the West, and in the South, we only heard it calling and the fact that we had the same times recorded for these activities is interesting and amazing because it tells us there are two birds, and there could be more..”

Moeumu said an adult bird was sighted just as it was taking off from the tree tops in the eastern side of Uafato.. “unfortunately leaving no chance to take a photo”.

“The Manumea population is critically low and if we are not careful this iconic species may disappear from our islands,” Moeumu warns. “Please remember that Manumea can be mistakenly shot by hunters shooting pigeons,” pleads the Conservationist.

“If we abide by the law and stop hunting lupe for the next few years, we could give Manumea a fighting chance,”.

Moeumu says we can be playing our part if we can please avoid clearing good standing patches of native forest that may be home to Manumea, often cleared for plantations.

Members of the public wanting to assist or wanting more information on how we can work together to save our national bird, please send a message to the Samoa Conservation Society or the Ministry MNRE via their Facebook pages or email conservesamoa@gmail.com.