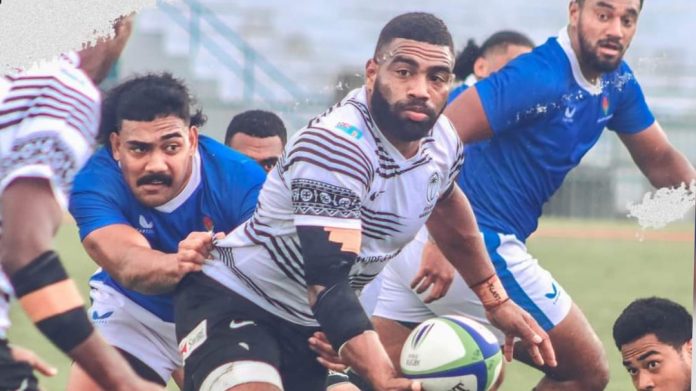 The Samoa A rugby team rebranded to Manuma Samoa have copped a tough 60-10 loss to the Swire Shipping Fijian Warriors in the first of a two-match Fiji Rugby Invitational Series at the HFC Bank Stadium.

Manuma took an early 5-0 lead in the 14th minute when No.8 Ailepata Jnr Lemalu scored the first try from a well executed line-out.

Samoa held off the hosts until the 20th minute when No.8 Ilikimi Torosi dived in the corner to level the score 5-all.

Fijian half-back Simione Kuruvoli added three points through a penalty that edged his side ahead by 8-5.

In the 30th minute, Fiji’s openside flanker Joji Kunavula picked the ball up from a ruck and scored Warriors’ second try. Converted by Kuruvoli to put Fiji further ahead by 15-5.

Fiji’s centre Apisalome Vota made a break that set up his winger Paul Dolokoto to score the Warriors third try.

Fiji’s kicking was on point to convert both tries and the Warriors had a comfortable 22-5 lead at the break.

The Warriors came back more focused and structured to dominate the second half and looked too strong for the Manuma.

Led by captain and hooker Tevita Ikanivere, the Fijian Warriors came back in the second half to score a whopping six second-half tries.

Fijian flanker Kunavula managed to get a double while other tries were scored by Peni Kadralevu, Jack Volavola and Michael Naitokani with Ikanivere getting one of his own.

Manuma’s replacement prop Paul Faalogo managed to cross over for a consolation try for Samoa but it was too little too late.

In a post match interview Fiji’s Captain said he was proud of the performance of his players.

“There are five or six of us senior players in the team and we told each other we had to lead by example for the youngsters..

“They played their hearts out.”

Tevita Ikanivere said he was really happy with the young players in the team, “who played according to the game plans.”

“And it feels good to get a win at home,” he added.

Manuma Samoa head coach Tupuivao Saumaniafaese Hanipale told the Fiji Times ahead of the match that his side would focus on playing their own game.

Tupuivao said they had a one-week camp in Samoa to enable their players from New Zealand and Australia to combine well with their local teammates.

“Our focus is to play our own style of rugby,” he said.

“We know the Fiji Warriors team is made up of Fijian Drua players and they will come down hard on us..

“We have 23 local players who are fighting for their spots in the national team and they come in with different styles of rugby..

“Our international boys bring a lot of experience and culture, so it is all about putting together their talents, skills, experience and playing our style of rugby.”

Tupuivao said most of their players came from a sevens background.

“Our two local players, Luke Malietoa and Jonathan Toelupe, are part of our academy and recently went to Australia..

“Fijian-born Fritz Rayasi, who was part of the All Blacks Sevens, they all come in with a wealth of experience”.

Manuma Samoa will play the Fijian Warriors for a second and final match next Saturday, 3pm, at the HFC Bank Stadium.