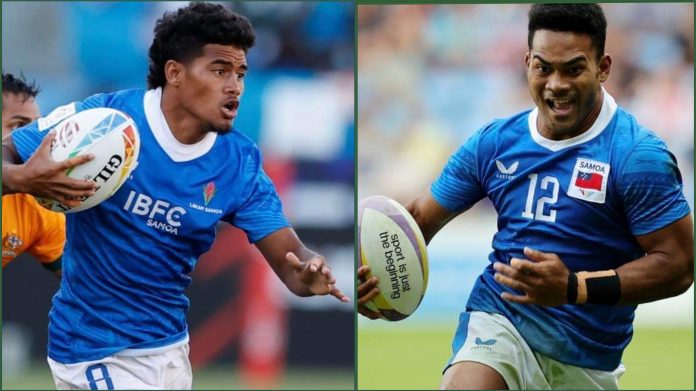 Samoa will advance to the top 16 stage of the Rugby 7s World Cup after defeating Uganda 33-7.

A loss would have ended Samoa’s road to the Rugby World Cup championship, so Uganda scared every Samoan around the globe when they crossed first under the post.

Uganda took a 7-point lead after the Samoan players slipped all over the paddock seemingly not wearing the right rugby boots.

This gifted Uganda possession and after 3 missed tackles by Samoa, Uganda took the lead.

The errors kept coming for Samoa and they just couldn’t find their groove.

Poor passes, dropped balls and missed tackles all contributed to the rocky start by the boys in blue.

Two minutes left in the first half and Samoa finally stringed together consistent phases to put Steve Rimoni-Onosa’i over to open Samoa’s accounts.

Paul Scanlan nearly broke through a half-gap and was tackled before making the offload to put Rimoni-Onosa’i under the post.

A perfectly placed kick-off by Samoa put Vaovasa Afa Su’a in acres of space. He was chopped down by Uganda 20 meters out before Uaina Sione got hands on the ball and sliced through Uganda to give Samoa and 14-7 lead at halftime.

Whatever Muliagatele Brian Lima said to his side at halftime fired up the Blue outfit.

Samoa scored 19 straight points in the second half.

The first of those points came via a beautiful set piece move from the scrum.

Melani Matavao took the ball right to the defence and at the very last minute threaded a short ball to Steve Rimoni who went through untouched to score under the post.

Uganda’s frustration started to show when they were shown a yellow card for ill discipline.

On the very next play Samoa ran the same set piece move but instead of a short ball to Steve, Melani Matavao found Paul Scanlan with a skip ball and Uganda couldn’t do anything but watch Scanlan cruise over for Samoa’s fourth try.

The super subs ran on for Samoa and made instant impact through Motu Opetai. Opetai leaped into the air and used his long limbs to come down with the ball.

Samoa spread the ball wide before switching back to Opetai who cut through the defence.

Opetai offloaded to Rimoni-Onosa’i who ended the match with a hat-trick.

Samoa now advance to play USA at 2:39am Samoan Time.