Manu Tuilagi issued a farewell message to Leicester Tigers fans after it was confirmed that he has agreed to join the Sale Sharks until the end of the 2020/21 Gallagher Premiership season.

The youngest of six brothers to have played for Leicester over a span of 20 years, Manu’s departure marks the end of an era in the history of the club with an incredible contribution by the Tuilagi family.

The 29 year old Samoan born England and Lions powerhouse midfielder is set to play his first match for his new club next Tuesday. 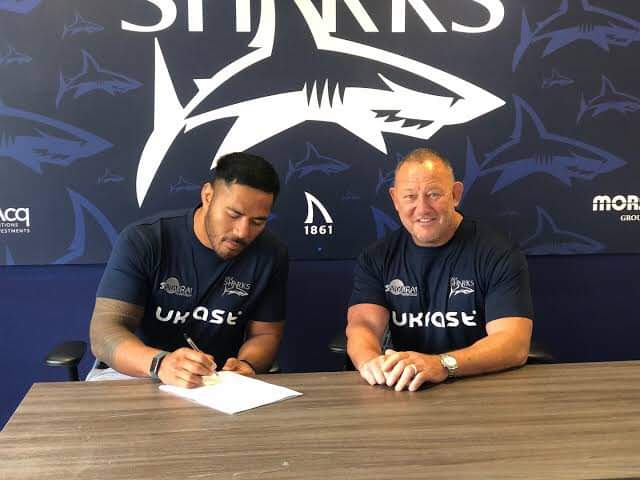 Manu has issued a statement in advance, to farewell the club he had joined as a teenager.

“I would like to take this opportunity to convey our thanks to everybody at Leicester Tigers for all their love and support for the past eleven years,” said Tuilagi.

“I’m very grateful for all the support and friendship from the coaches and all the staff at the club, but even more so to the remarkable supporters who make the Tigers such a unique special club! It has been an enormous honour and privilege for me and my family to be part of the history of one of the greatest rugby clubs in the world. The Tigers have always been so special to myself and my brothers for the past 20 years.

“I wish for nothing but the best for our Tigers family going forward. Everyone has their own pathway in life and I’m excited to see what the future holds.

“I’m thankful to Steve Diamond and Sale Sharks for giving me this great opportunity and I’m looking forward to playing with some world-class players here.

“Leicester Tigers will always have a special place in the hearts of the Tuilagi family. With love and best wishes to all from Manu, Chantelle and Leilani. x”

The dynasty started in 2000 when Lauaki “Freddie” Tuilagi switched codes following a short two years with St Helens. Having already played at World Cup level for the Manu Samoa, Lauaki’s successful return back to rugby was marked by winning two Premiership titles and two Heineken Cups, starting on the wing in the 2002 final victory over Munster.

Three years into his stay at Welford Road, Freddie was joined by his brother Henry, who over the next four years would bring a level of brutality at No8 which would somehow make fellow professionals look like schoolboys at times.

Freddie left Leicester in 2004, but by now the revolving door of Tuilagis was set in motion and his exit saw the arrival of winger Alesana, who would only enhance the family’s reputation in England.

Alesana Tuilagi would represent Leicester more than 100 times over the next eight years, winning three Premiership titles and starting in two losing Heineken Cup finals. He left Leicester in 2012, having been the top scorer in the league the season before.

He was also joined by brothers Andy and Vavae while at Welford Road, but their time at Leicester did not reach the heights that their brothers’ did.

This obviously leaves Manu as the final part of this fraternal legacy in the Midlands, who made his Premiership debut at the age of 19 in 2010. Over the past ten years he forged a reputation that precedes him.

The centre is distinguished from his brothers as he is an England international, having moved to Leicester at the age of 12, while the other five siblings represented Samoa.

That may have helped develop his reputation as a global force, but it is a legitimate claim that he is the best of all his brothers and has produced some performances across his career in which he has come as close as any player ever has to be literally unstoppable.

On top of that, the Tuilagi name has also been intergenerational as Freddie’s two sons, Brian and Fred, came through the Tigers academy and both will now play for London Scottish next season.

Few families have contributed to a team’s success in the same way the Tuilagis have and it is a sad day for Leicester to end their 20-year association with the family.